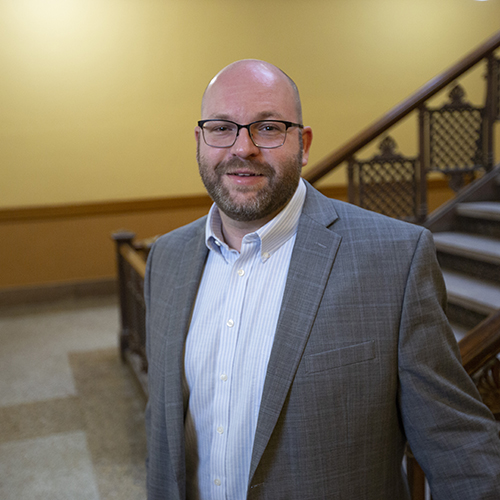 Jerry Zamzow enjoys every part of his job as associate vice president for research, particularly “being a resource to investigators and helping them accomplish important things.”

One way Jerry assists researchers is by helping them navigate the regulations and guidelines for responsible research, which Jerry sees as integral to the research process. His responsibilities in the Office of the Vice President for Research include overseeing the Office of Research Ethics (ORE), the Office of Biotechnology, Laboratory Animal Resources (LAR), and the Attending Veterinarian, as well as three research centers on campus.

His work experiences have touched on nearly every aspect of the research process. After graduating from Iowa State University, Jerry worked as a microbiologist in private industry with a protein fractionization company that marketed various proteins for human and animal nutrition and bioscience applications. He also worked in technical transfer and quality assurance, working with vaccines for both humans and animals. In addition, he did primary research in the ISU Animal Science Molecular Animal Nutrition group.

Jerry started at the Office of the Vice President for Research in 2008, developing the research post-approval monitoring program in what is now the ORE.  He served as director of that service support unit and also as interim director and then director of LAR before assuming his current position in 2015.

What do you predict Iowa State researchers will be working on in 2050?

“With the huge population growth that we are experiencing in the world, Iowa State is well positioned to have a significant, positive impact on food systems and environmental systems that will help meet those rising needs. I expect Iowa State to be a bigger and better player in those fields in the years to come.”

Jerry can help with: Guiding researchers through the university research system and putting researchers in touch with the unit within the OVPR that can help them solve problems and answer questions.