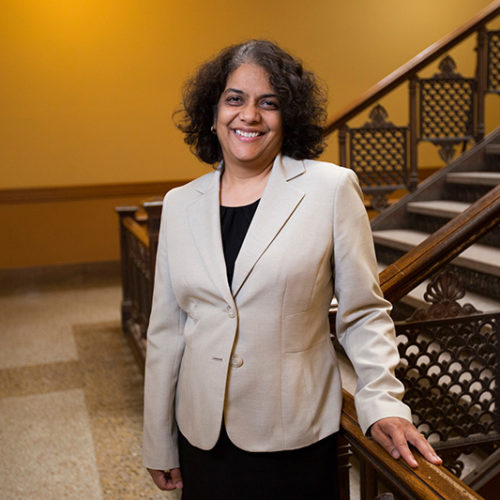 Surya is excited about working with faculty, developing interdisciplinary teams and helping grow the research enterprise at Iowa State. She also identifies Foundation funding opportunities and assists faculty and teams pursuing these awards.

Surya has been involved in interdisciplinary research herself for many years at the interface of engineering and biology. She is the Anson Marston Distinguished Professor and Carol Vohs Johnson Chair of Chemical and Biological Engineering.

Her work has been recognized by several awards, including an NSF CAREER award, a 3M Non-tenured faculty award, a Big 12 Rising Star Award, an IIT Bombay Young Alumni Achievement Award, and the Boylan Award for Outstanding Research. She was named one of the top 100 young innovators by MIT’s Technology Review magazine and is an elected Fellow of the American Institute for Medical and Biological Engineering and the American Association for the Advancement of Science. She was recently elected as a Fellow of the National Academy of Inventors. Surya has been a member of the Defense Sciences Study group, the NIH Biomaterials and Biointerfaces study section, and a participant in the National Academy of Engineering Frontiers of Engineering Symposium.

Surya completed her undergraduate chemical engineering education from IIT Bombay in 1993, and earned her Ph.D. at Purdue University in 1996. She served as chair of the Department of Chemical and Biological Engineering from 2009 to 2013. She is also affiliated with and served as program director of Materials Chemistry and Biomolecular Materials at the Ames Laboratory from 2004 to 2008. Her research interests are in polymeric nanobiomaterials, specifically in drug/gene and vaccine delivery and neural tissue engineering, and in the area of bioinspired materials. She has over 150 publications and six patents.

What is your favorite Iowa State research discovery?