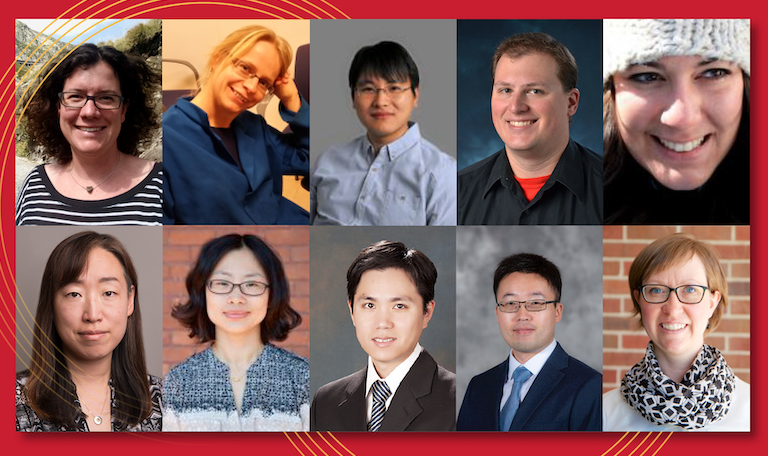 Ten Iowa State University researchers were selected to receive Faculty Early Career Development Program (CAREER) awards from the National Science Foundation during the 2020 fiscal year, ending June 30, 2020. This is the largest number of Iowa State CAREER award recipients in the past five years.

Considered to be the National Science Foundation’s (NSF) most prestigious award, the CAREER program supports early-career faculty who have the potential to serve as academic role models in research and education. Between 2016 and 2019, the NSF awarded 24 CAREER awards to Iowa State early-career scholars. In fiscal year 2020 alone, 10 university researchers received more than $2.7 million in CAREER funding.

“The CAREER award is a tremendous honor. It is a prestigious national recognition and, perhaps more than any other award, it truly embodies the Iowa State mission to create, share, and apply knowledge to make Iowa and the world a better place,” said Interim Vice President for Research Guru Rao. “These recipients represent the best of Iowa State because they are effectively balancing the shaping of young minds with research endeavors that are designed to deliver positive impacts to our society.”

Proposal Title: “Combining Physical and Numerical Models to Characterize the Contribution of Semi-Brittle Rheology to Deformation Dynamics and Strain Transients”

Reber is seeking to better understand plate tectonics and earthquake generation by constraining the flow behavior and slip dynamics of faults. Her research will include both physical experiments and numerical investigations designed to form a better understanding of the factors that cause earthquakes. In addition, she will work to bring together an interdisciplinary science communication class for geology, design, and journalism students.

Zaikina’s research is focused on answering three questions: “How can new compounds be made?”; “How are atoms connected to each other in these new compounds?”; and “What useful functional properties do these compounds have?” In conjunction with her research group, Zaikina will utilize theoretical predictions about compound stability, innovative synthesis methods, and in-situ reaction monitoring — visualization of reactions at an atomic level as they progress at high temperatures. The combined efforts of Zaikina’s project will help to establish a program aimed at training graduate and undergraduate students in the fields of synthesis, solid state chemistry, crystallography, and materials science.

Fei plans to explore chiral edge plasmon polaritons (EPPs) — nanophotonic modes formed by coupling between photons and electrons in materials — in novel two-dimensional materials. The ability to control the direction of light flow in the nanoscale is desirable for high speed signal processing and communications. Fei’s research will use state-of-the-art, near-field optical microscopy to perform ultra-fast and ultra-small imaging of chiral EPPs. The work will advance knowledge of nanoscale light-matter interactions in two-dimensional materials.

Mansell will use techniques from synthetic biology, metabolic engineering, and glycobiology (the study of carbohydrates) to engineer the population dynamics of the microorganisms that live in the human gut (the microbiome). Protein drugs are difficult to deliver orally, and often require injections or intravenous methods. His research approach will equip bacteria in the gut with the enzymes needed to utilize unique food sources, favoring their growth and ability to function. Engineered bacteria have the potential to be used to synthesize and deliver therapeutics directly in the gut, avoiding the need for injections. Successful control of the dynamics in the human gut will not only improve outcomes for engineered biotherapeutics, but also enable the study of the individual contributions each species to host health.

Wilkinson is investigating the drivers of nutrient cycling in lakes in order to forecast future change, particularly within the realm of carbon cycling in hypereutrophic lakes. In Iowa, where she will focus her attention, more than 50% of the lakes are extremely rich in nutrients, or hypereutrophic, mainly as a result of intensive agriculture. By using a time series approach for data collection, Wilkinson’s work will focus on answering three questions: “Is primary productivity in lakes and the adjacent terrestrial landscape synchronized?”; “How do properties of the ecosystems drive the degree of synchrony?”; and “How much synchrony is explained directly by climate effects versus indirect coupling mechanisms such as nutrient subsidies?”

Ji-Yeong I, assistant professor of education

I will collaborate with secondary mathematics teachers to support emergent bilinguals in learning mathematical modeling, a Common Core State Standards for Mathematics requirement for all K-12 students. With a focus on readiness and mastery of algebra, mathematical modeling, situational professional development, and teacher-researcher collaboration, I’s work will be used to improve how secondary math teachers position emergent bilinguals in mathematics classrooms, and the quality of their mathematical instruction. The project will take place in the Des Moines Public Schools district, with the goal of improving student learning in mathematics education.

Lu hopes to understand, quantify, and predict how land-to-aquatic nitrogen loads respond to hydroclimate extremes, mainly droughts and floods, and to establish a data-driven, hydro-ecological learning platform for educating next-generation scientists, decision makers, and voters. Her studies will assess the inter-annual and intra-annual variations in nitrogen loads from the Upper Mississippi-Ohio River Basin, a region contributing 45% of nitrogen delivered from the Mississippi-Atchafalaya River Basin to the Gulf of Mexico. By blending a deep learning approach with a process-based, hydro-ecological model, Lu intends to characterize and model cross-scale climate sensitivity of nitrogen loads, and predict future potential in mitigating hydrological nitrogen loss under climate extremes.

Liu will develop networking-computing co-designs to facilitate rapidly growing data analytics for machine learning and artificial intelligence, and support both data and model parallelisms in wireless edge networks. Liu’s research will focus on three complementary research thrusts, each of which addresses one key aspect in supporting distributed data analytics at a different networking protocol layer: communication-efficient distributed optimization at the physical layer; joint-queueing-computing scheduling at the medium access control layer; and admission control and resource virtualization at the transport layer. Collectively, the results of this research will contribute to a new direction of wireless network control, optimization theory, and systems design.

Zheng plans to tackle one of the main aspects of data-driven scientific discovery: the storage systems that manage massive amounts of data. A fundamental requirement of the systems is crash consistency, which ensures the system can recover to a consistent state after a sudden crash event, such as a power outage or hardware failure. Zheng’s project will build a scalable framework called Crash Consistency Testing Machine to address the issue and leverage advances in virtualization and software engineering. By fundamentally advancing the crash consistency of the core storage stack, his work will improve widely used practical systems, such as Linux operating systems, and reduce downtime and data loss.

Swanner will determine how extensive anoxic and iron-rich (ferruginous) lakes are on the modern earth, why they are ferruginous, and how their microbial processes influence the global carbon cycle. As part of her research initiative, postglacial lakes in two field areas in Minnesota will be evaluated for meromixis and ferruginous conditions, with iron budgets constructed to identify and quantify iron sources. The results of Swanner’s activities will better outline the extent of ferruginous conditions globally, fluctuations of water and elements between surface and groundwater reservoirs, and fluxes of carbon under ferruginous conditions.

More information about the CAREER program, including upcoming deadlines, eligibility requirements and proposal preparation guidelines, can be found on the FAQ page of the NSF website.