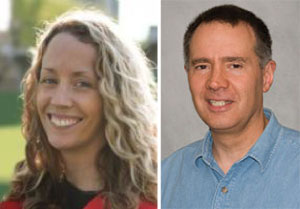 Two Bailey Research Career Development awards will launch efforts to better understand the effect of obesity on ovarian health, and the impact of antibiotics on a growing health problem in the U.S.

Keating will investigate how obesity affects a female’s ovarian capacity, and in turn the ability to protect against chemicals that damage ovarian DNA. Her research will further the understanding of infertility, and the origins of birth defects and ovarian cancer – not only for human health, but for animal agriculture as well.

Phillips will study how the use of broad-spectrum antibiotics – which can reduce beneficial microorganisms in the gut microbiota – allows Clostridium difficile infection to proliferate. CDI causes at least 250,000 infections and 14,000 deaths in the U.S. every year, as well as more than $1 billion in medical costs.

Every year, the Bailey award is given to faculty whose research is innovative and not only increases fundamental knowledge but also has practical applications. The goal of the award is to allow faculty to devote time toward high-risk, high-impact research that addresses emerging scientific, technical and/or societal problems resulting in practical applications and, in appropriate disciplines, extramural funding.

“Bailey award-winners have an opportunity to pursue a brand new transformative research thrust that links fundamental questions to potential applications,” said Sarah Nusser, vice president for research. “Both of these projects are strongly focused on enabling human and animal health, supporting one of Iowa State’s key research themes.”

The Bailey Research Career Development Award was established by a gift from Carl A. and Grace A. Bailey. The award is $50,000 per year for up to three years.

Proposals for the next round of funding are due to colleges by Jan. 31, 2018. Colleges then select one proposal each to submit to the Office of the Vice President for Research. For more information, go here.