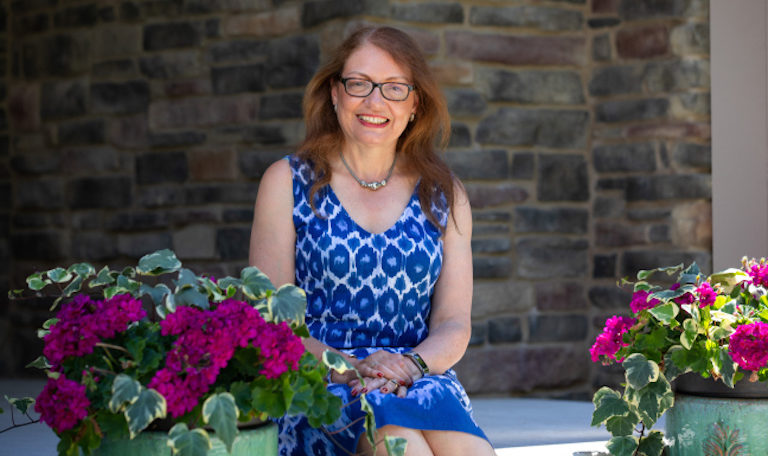 Julie Irish, assistant professor of interior design and director of undergraduate education for the department, at her Ames home. Photo by Christopher Gannon.
09.8.2021

This is the latest entry in a series of articles telling the personal stories of Iowa State University faculty and scientists whose work is changing the world for the better. Click here for the complete list of Change Agents.

After a sweltering summer morning riding her horse Pepe at an Ames barn, Julie Irish headed home to work and corral her puppy, Benny, who ignores cries of “None of your business!” as he wiggles to greet visitors. A decade ago, Irish never would have imagined she’d be here.

Irish is an assistant professor of interior design and director of undergraduate education for the department at Iowa State University. She is the recipient of numerous research grants since she started working at Iowa State three years ago, and has been recognized for her teaching.

Her career started 4,000 miles away in Wales, where she worked as an interior designer in the capital city of Cardiff. For over 20 years, Irish worked on projects for the Cardiff County Council including educational buildings, libraries, airports, chapels, crematoria and historical buildings such as Cardiff City Hall and the Mansion House.

“My claim to fame, though, is I designed a restroom in Cardiff Castle for her majesty the queen,” Irish said. “I don’t know if she ever used it. I like to think she did.

“When you get a royal visit to an area, everybody does up their buildings. One of my colleagues used to say, ‘The queen must think the world smells of new paint.’”

Growing up in Cornwall, England, Irish wanted to be a veterinarian, but she struggled in science. She was always drawing and crafting, though, which led her to the design field. She received her degree in interior design, followed by a master’s degree in inclusive design from the University of Reading in England.

That master’s degree came on the heels of the passage of the Americans with Disabilities Act in 1990, and the United Kingdom’s Disability Discrimination Act in 1995. While she doesn’t have a personal connection to a person with a disability, the news struck a chord.

“I became interested in this idea of designing for people with disabilities,” she said. “My degree helped me to understand how the environment affects people, and how I as a designer can improve.”

She became an accessibility consultant, and while the Cardiff County Council didn’t have a lot of funding to work with, Irish showed colleagues and clients how they could make simple adjustments to help those with disabilities navigate, such as using colors to help people with vision loss find their way more easily.

“People aren’t disabled,” she said. “They’re disabled by the environment.”

Irish was asked to design a school in Cardiff for children with severe disabilities and autism. Due to her education and training, she figured it wouldn’t be difficult. But once the project began, she realized there was next to no research on design for children with autism. So, she studied other schools’ plans for this population and talked to experts in education and medicine to help her design.

“I had a nagging feeling,” she said. “It was still at the back of my mind that there wasn’t research to help me design for people with autism.”

So, she decided to get her Ph.D. Irish settled on the University of Minnesota, where she and her family landed in 2011. Her dissertation focused on design for children with autism, for which she conducted an experiment applying colored wayfinding aids to doors, signage and shapes on a school floor to see if children with autism could navigate the school easier than if the wayfinding wasn’t there. She found that all the children were able to find their way around after they had been given detailed wayfinding instructions. The children also used a variety of elements in the hallways to find their way around.

After completing her Ph.D. and teaching and conducting research at UM for a year, Irish accepted a position at Iowa State’s College of Design in 2018. The college’s multidisciplinary focus drew her in, as it mirrors what occurs in real-world design agencies.

She’s taught a studio in which students studied existing buildings to see how they could be redesigned for adults with autism. In spring 2022, Irish and colleagues will lead a design studio to look at the former Veterans Affairs Hospital site in Waterloo to see how it could be redesigned.

“Once you leave the educational system, there aren’t really many supports for young adults with autism,” she said.

This summer, Irish is returning to the site of her Ph.D. experiment a decade ago to conduct a post-occupancy evaluation. She’ll determine what worked, what didn’t and what could be done differently.

“The number of people with disabilities is growing, and perhaps we haven’t quite caught up to that in terms of design,” Irish said. “At some point we’ll probably all be disabled or have some disability as we age.”

“If you’d asked me 10 or 12 years ago if I’d be at a university in the U.S. I’d have said, ‘No, don’t be silly,’” she said. “You see, because I wasn’t exactly a spring chick when I moved over. My family and friends were very supportive, but it was quite radical to move over all this way. Thanks to my husband and son and Panja the family cat who jollied along with me.”