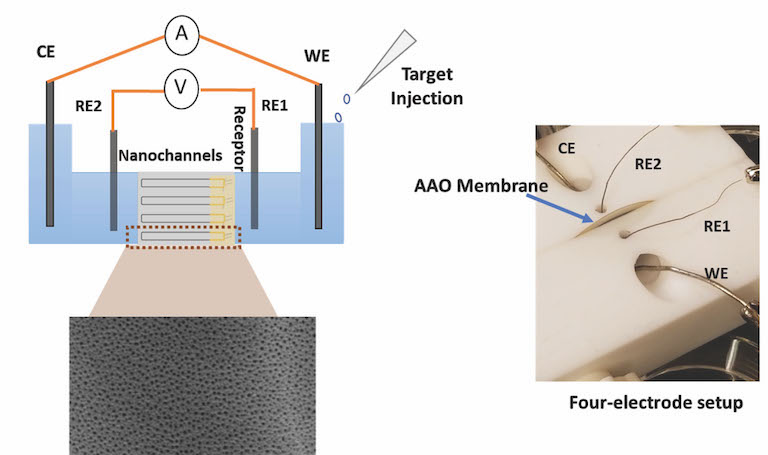 In situations where humans are exposed to biothreats such as a virus, fast detection and response can make all the difference in mitigating harm. But the ability to detect biothreats often relies on expertise and equipment that’s difficult to transport and takes time to carry out.

Researchers at Iowa State University hope to change that through a collaborative agreement with the U.S. Department of Homeland Security worth as much as $2.5 million over five years. The effort aims to develop a portable sensor platform capable of detecting numerous biothreats, such as the coronavirus and other toxic agents. Such sensors could be kept in government buildings, airports, or anywhere else at risk for biothreat exposure and could help to quickly detect and mitigate dangers, said Marit Nilsen-Hamilton, a professor in the Roy J. Carver Department of Biophysics, Biochemistry and Molecular Biology and principal investigator of the project.

“Up to now we’ve been looking at detecting infectious viruses in people who are infected,” Nilsen-Hamilton said. “This is an opportunity to develop a means of detecting viruses and other biothreats in the air. In other words, we’d be able to quickly identify when there is a biothreat in the surrounding environment and protect people from exposure.”

The team proposes to create a device roughly the size of a shoebox that can sample the air for a range of biothreats, including Ebola virus, SARS-CoV-2 and various toxins. The technology would include a microfluidic collection device that gathers air samples and a suite of sensors to detect and identify biothreats. The device will transfer particles extracted from air samples into a liquid stream to concentrate the particles. The stream passes through an aluminum oxide membrane that contains aptamers, or nucleic acids that behave similarly to antibodies in the human immune system. The biothreat particles bind to the aptamers, which sets off an electrical signal that the sensors detect.

Researchers in Nilsen-Hamilton’s laboratory will select aptamers capable of binding to the proteins of the various biothreats included in the scope of the project. Her lab has isolated and characterized eight aptamers from millions of aptamer candidates selected for previous research projects, and she said one of the challenges for this project will be finding optimal aptamers for each threat.

Todd Kingston, an assistant professor of mechanical engineering and research team member, said part of the challenge for the project comes from the wide range of biothreats the device aims to detect. The device must reliably capture and identify various particles that have dimensions ranging from a few nanometers to micrometers, a unit of measurement that’s a thousand times larger.

The difference between a micrometer and a nanometer might seem insignificant under most circumstances, but, at the microscopic level where the researchers work, that’s a lot of variability for one technology to handle. Kingston said the scientists are considering ways to capture a wide range of aerosolized biothreats.

The research team also includes Monica Lamm, an associate professor of chemical and biological engineering; Pranav Shrotriya, a professor of mechanical engineering; and Wendy Maury, a virologist at the University of Iowa. Shrotriya said the team intends to have a functional device by the conclusion of the collaborative agreement.

“We hope to have a working device that acts as a proof of concept at the end of five years,” Shrotriya said “We want to make sure the device can trap different size particles as well as sense them.”