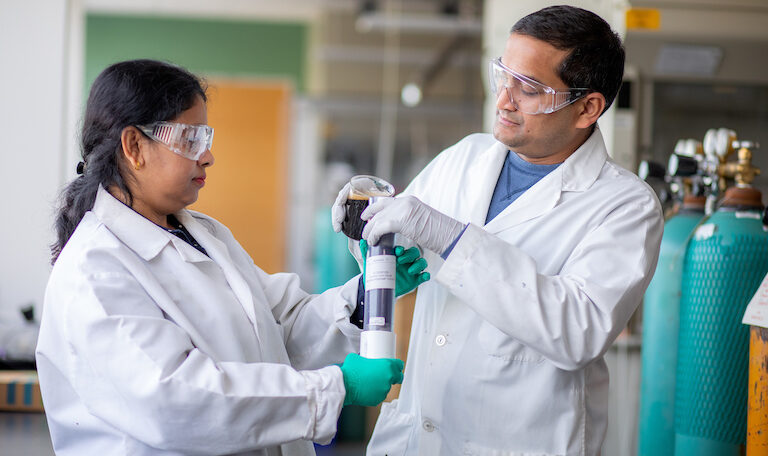 Scientists Chumki Banik, left, and Santanu Bakshi show how biochar can be used to extract nutrients from livestock manure. Bakshi is pouring a simulated manure sample into a column of biochar, demonstrating how a biochar-based bioreactor system would separate, capture and process phosphorus for use in slow-release fertilizer pellets. Photo by Christopher Gannon.
03.3.2022

Heat up stalks, stems, leaves or wood in a reactor with little or no oxygen (in a process called pyrolysis) and you get bio-oil for fuel and biochar for fertilizer.

There’s always a market and a value for the liquid energy.

But efforts to study, develop and market the black powder as a fertilizer weren’t adding a lot of value to biochar – at least until there’s a carbon market that will pay a premium for the charcoal’s ability to store carbon. 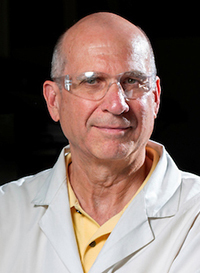 Iowa State University’s Robert C. Brown and his collaborators thought there might be some new ideas and applications that could make biochar a more valuable and useful product, thus enhancing the economics of biorenewables.

So, a few years ago – with nearly $1.5 million from the Biomass Research and Development Initiative, a joint program of the U.S. Departments of Agriculture and Energy – they began using biochar to capture phosphorus from livestock manure and create a slow-release crop fertilizer.

A new, three-year, $1 million, competitive grant from the Agriculture and Food Research Initiative of the USDA’s National Institute of Food and Agriculture will allow them to build on that biochar project.

The researchers say their latest project could one day provide “ecosystem services” such as reductions in manure odors, greenhouse gas emissions and fertilizer runoff to waterways.

“This new grant gives us opportunities to specifically study animal agriculture for ways to valorize biochar even further,” said Brown, an Iowa State Anson Marston Distinguished Professor in Engineering, the Gary and Donna Hoover Chair in Mechanical Engineering, the director of Iowa State’s Bioeconomy Institute and the leader of the latest biochar research project.

Biochar as a Manure Manager

Santanu Bakshi, an environmental research scientist at the Bioeconomy Institute, has spent about a dozen years studying biochar, everything from doctoral student efforts at the University of Florida to remove copper from the soils of citrus groves to Iowa State efforts to make phosphorus stick – adsorb – to the surface of biochar.

There’s a trick to the latter: Santanu found that pretreating biomass with iron sulfate, an inexpensive byproduct of steel production, modifies the surface of biochar, which has a mostly negative-charged surface, to adsorb, rather than repel, negatively charged molecules such as phosphorus. That biochar-phosphorus combination ended up creating a slow-release fertilizer.

“When we found biochar was useful to trap phosphorus, we thought it would be useful for recycling nutrients from animal manure,” Bakshi said.

The new project will continue to develop biochar technology for capturing phosphorus. It will also develop technology that uses a naturally occurring mineral called zeolite (which attracts positively charged molecules) to capture nitrogen. The two nutrients would then be processed into solid, slow-release fertilizer pellets.

The research team (see sidebar for the full team) will start in the laboratory. Next year, with the help of an industrial-scale pyrolyzer now under construction just west of Des Moines, they’ll have enough biochar for laboratory, farm and field studies.

Bakshi said the goal is to develop an automated bioreactor system. Manure would move through a series of biochar and zeolite chambers that separate, capture and process the nutrients. The resulting biochar and zeolite would then be made into pellets and applied to fields rather than raw manure with its potential for odor, transportation, runoff and greenhouse gas emission problems.

That switch could have big environmental impacts.

“The United States Environmental Protection Agency estimates that 15% of the greenhouse gas emissions are associated with animal manure management in the United States agricultural sector,” the researchers wrote in a project summary. “Hence, it is critical to develop enhanced nutrient management strategies to boost nutrient use efficiency in crop production, improve water quality, and reduce odorous and greenhouse gas emissions.”

“The United States Environmental Protection Agency estimates that 15% of the greenhouse gas emissions are associated with animal manure management in the United States agricultural sector,” the researchers wrote in a project summary. “Hence, it is critical to develop enhanced nutrient management strategies to boost nutrient use efficiency in crop production, improve water quality, and reduce odorous and greenhouse gas emissions.”

The new project will start with biochar supplied by Iowa State’s existing pyrolysis pilot plant at the BioCentury Research Farm west of Ames.

Iowa State’s pilot plant – developed, in part, as part of RAPID, the country’s 10th Manufacturing USA Institute, supported by the U.S. Department of Energy and led by the American Institute of Chemical Engineers – tests the autothermal pyrolysis process developed at Iowa State.

The autothermal process adds a small amount of air to normally oxygen-free pyrolysis. That partially burns some of the biomass being processed and creates some heat for the reactor, dramatically increasing the rate that biomass can be converted to bio-oil and biochar.

One of the RAPID project’s industry partners, Stine Seed Co. of Adel, is working with Frontline BioEnergy of Nevada to build an industrial autothermal pyrolyzer plant based on Iowa State’s technology. It would also test the idea that small, efficient biorefineries could process local biomass, saving the cost and trouble of transporting large amounts of biomass to big biorefineries.

“We’re looking forward to scaling up our technology in the Stine pyrolyzer,” Brown said. “That’s important because so much of our work has been done at the lab scale and with small pilot plant studies.”

But those studies have led to big ideas for the bioeconomy such as finding ways to provide ecosystem services in addition to biorenewable products. As a summary of the Bioeconomy Institute’s work says, “Biorenewable feedstocks are produced from an ecosystem that needs to be conserved and renewed in order to ensure future production capacity.”