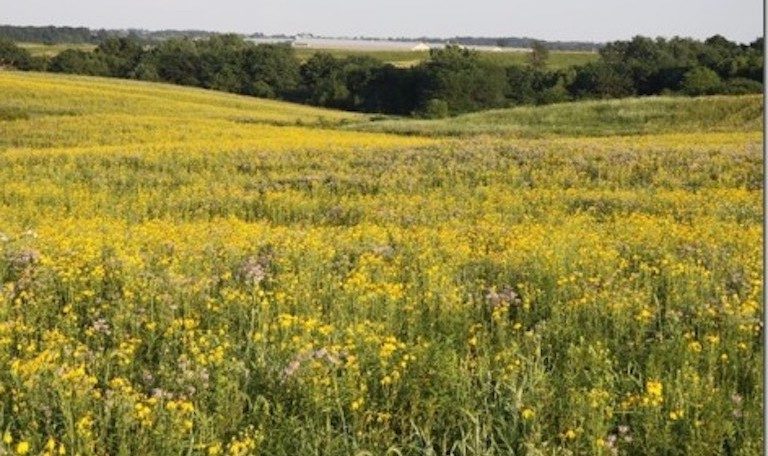 The five-year, $10 million grant from the U.S. Department of Agriculture’s National Institute for Food and Agriculture will power the Consortium for Cultivating Human and Natural reGenerative Enterprise (C-CHANGE) as it works to create new value chains on U.S. farms, with emphasis on the generation of renewable natural gas, improved rural economic outcomes and protection of the environment.

The project director on the transdisciplinary and multi-institutional grant is Lisa Schulte Moore, a professor of natural resource ecology and management and associate director of the Bioeconomy Institute at Iowa State. Schulte Moore said the consortium will innovate methods for farmers to make more efficient use of resources while maintaining current value chains, resulting in an agricultural economy that’s both more profitable and environmentally sound.

“We recognize the benefits of current production systems but also that there’s a lot of inefficiency in how we use land, sunlight, nutrients and water,” Schulte Moore said. “We also realize that farmers and rural communities are struggling. We know we can address inefficiencies by adding perennials and recoupling crop, livestock and energy systems. Research is needed to ensure these combinations are also profitable.”

C-CHANGE researchers are developing new ways for farmers to produce renewable natural gas that could be used as an energy source both on and off farms. The project centers on anaerobic digestion, or the process by which microorganisms break down biomatter and produce biogas, which is mostly methane, the main component of natural gas. With new separation technologies, biogas can be upgraded to renewable natural gas and distributed through the gas pipeline network, much like renewable electricity is distributed through the electrical grid. The researchers are experimenting with how to optimize the digesters, or the containers where the biomatter is broken down into methane. Researchers will test variables such as feedstock mixture, pretreatment, digester temperature and water content to make the process as practical as possible.

“For more than 50 years, anaerobic digestion has been promoted as a way to both improve environmental management of livestock manures and to produce renewable energy,” said Tom Richard, director of Penn State’s Institutes of Energy and the Environment. “But adoption of anaerobic digestion has been limited by high capital costs and management complexity, which has slowed the advance of this industry and the underlying technology. We will be working with farmers and other industrial partners to update anaerobic digestion for the 21st century, applying the principles of process intensification, automation and economies of scale to reduce costs, simplify operations and expand digester feedstocks beyond manure to incorporate perennial grasses and winter crops into their operations as a source of biomass for the digesters.”

Schulte Moore said some areas of farm fields – particularly uneven terrain that is especially susceptible to erosion, frequently inundated areas or turnrows – can yield poor or negative profits for corn and soybean producers. Switching those acres out of corn and soybeans to perennial grasses could save farmers money and protect the environment, she said.

Roeslein Alternative Energy is already pioneering work in the area of the grant. Since 2012, Roeslein has been working with Smithfield Foods to adjust practices on their hog farms that have resulted in greater efficiencies, improved environmental outcomes and a profitable new renewable natural gas enterprise. Research will help determine additional markets for the products of anaerobic digestion. For instance, the digestate – or material remaining after anaerobic digestion – could be reapplied to fields to enrich soils after the biogas has been removed. The decomposed digestate should provide a more stable source of nutrients than directly applying manure as a fertilizer, resulting in lower greenhouse gas emissions and less nutrients running into waterways.

“With this grant, we hope to demonstrate that land unprofitable for annual crops could be used for renewable energy production from native grasses and forbs through the anaerobic digestion process, Roeslein said. “Ecological services from this perennial biomass crop would prevent flooding, reduce nutrients running into our streams and rivers that could save hundreds of billions of taxpayer money on water treatment facilities while improving the health of our future generations.”

The consortium also will engage producers, commodity groups and companies to see how receptive farmers and businesses are to implement management practices and other knowledge emerging from experiments. Adopting these innovative approaches could be facilitated through changes in agricultural policies.

“Agriculture is always going to be vital to rural economies,” Schulte Moore said. “The C-CHANGE team is trying to meet current societal demands while returning more value to people and the land.”

In addition to Iowa State, Penn State, and Roeslein Alternative Energy, other institutions involved with the new C-CHANGE grant include FDCE of New Albany, Ohio; the USDA Agricultural Research Service National Laboratory for Agriculture and the Environment in Ames, and 33 partner organizations.