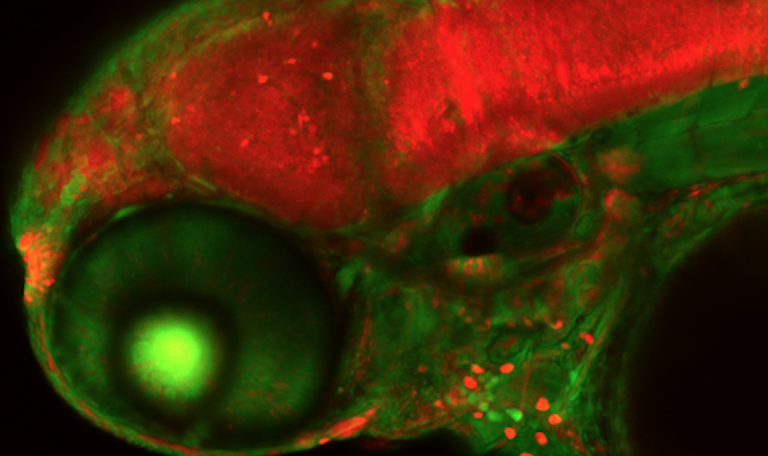 The four-year, $2.8 million grant from the National Institutes of Health allows Maura McGrail, an associate professor of genetics, development and cell biology and principal investigator, and her collaborators to continue their efforts to develop gene editing technologies to model human disease in zebrafish. The research aims to build new tools to determine which genes have therapeutic potential to treat human genetic diseases that affect the cardiovascular, immune and nervous systems. Zebrafish share much of their genetic makeup with humans, and the researchers hope their work will lead to more effective treatments for many of the most pressing diseases in humans.

“The technology that we’ve developed allows us to modify genes in a precise way that places gene activity under spatial and temporal control,” McGrail said. “One of the challenges in disease research is understanding the impact of gene loss at the cellular level. By modeling genetic disease in zebrafish, we’re able to reconstitute the complexity of human disease in a living system and visualize how cell processes are disrupted.”

The method developed by McGrail and her colleagues combines gene editing technology with site-specific recombination enzymes. Utilizing the two in concert allows the scientists to control where and when a gene is deactivated. The new grant will also test approaches to optimize the efficiency of their method and expand on their ability to introduce more subtle gene changes frequently found in human disease genes.

“It’s like flipping a switch,” McGrail said. “We can deactivate a gene in a specific tissue, and investigate how that affects cell viability and organ function, providing insight into the process of disease pathology.”

The research team also published an article in the peer-reviewed academic journal eLife, released last week, that lays the foundation for much of what they will do with the new grant. The paper describes the researchers’ ability to use gene editing to target integration into the genome, or introduce new DNA into the genome with great precision.

The zebrafish is a small, freshwater species, usually only a few centimeters in length, that makes an ideal model organism for genetic study because of the species’ transparent embryos, which allow for easy study. The zebrafish genome also shares up to 80% of the genes that cause disease in humans, Essner said.

“Because of that high degree of conservation, we believe we can reach many human diseases,” he said.

For instance, the researchers foresee a future in which gene editing technology could be used to treat certain kinds of cancer. McGrail said disease progression in some cancers is caused by gene deactivation, but what if doctors could reactivate those genes? Would that suppress the growth of tumors? McGrail and Essner said their research will take an important step toward answering such questions.