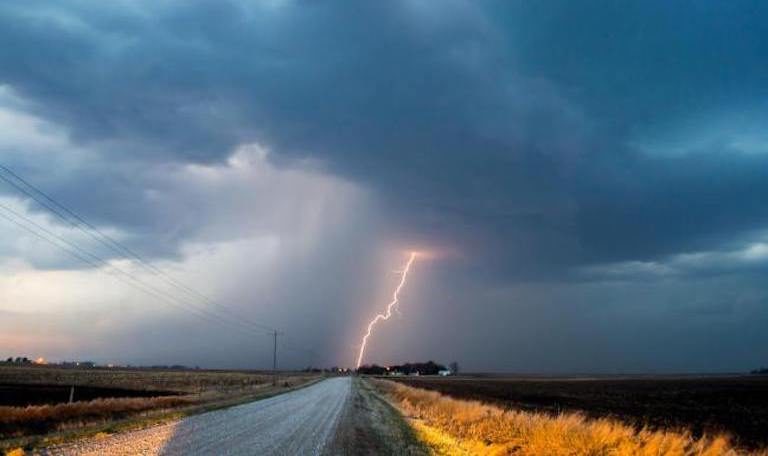 Intense rainfall events drive a significant portion of nitrogen yields from agricultural fields. Understanding the role of extreme rainfall in this process can inform decisions on how and when to apply nitrogen fertilizers to crops, according the authors of a recent study. Image by the National Oceanic and Atmospheric Administration
09.22.2020

Heavy rainfall drives a third of nitrogen runoff, according to new study

Heavy rain events that occur only a few days a year can account for up to a third of the annual nitrogen runoff from farmland in the Mississippi River basin, according to a new study from Iowa State University scientists.

The research, published Friday in the academic journal Communications Earth & Environment, uses innovative computer modeling techniques to quantify nitrogen runoff from land ecosystems into rivers and streams. Nitrogen fertilizers applied to Midwestern agricultural land can make its way down the Mississippi River where it contributes to a hypoxic zone in the Gulf of Mexico that harms the marine life living there. The findings from the study could inform farm management practices, including the timing and application of nitrogen fertilizers, to reduce those effects, said Chaoqun Lu, assistant professor of ecology, evolution and organismal biology at Iowa State University and lead author of the study.

Lu has worked for years on harnessing computer modeling to simulate various ecological processes. Her previous work, for instance, looked at how agricultural land stores carbon, a process known as carbon sequestration. For this paper, Lu and her colleagues used modeling approach and publicly available water quality data dating back to 1980 to analyze how precipitation affects nitrogen loading in Midwestern waterways.

Lu said previous studies have shown that years with high rainfall totals also see higher nitrogen loading from land to water bodies. But the new study looked closely at extreme rainfall events throughout the Mississippi River basin, defined as any rainfall that exceeds the 90th percentile of historical daily precipitation records for a location in a given month. Basin wide, extreme precipitation events occurred only 8.6 days per year on average, but they contributed to approximately one-third of annual total nitrogen yields, according to the data.

“What attracted us to look at these questions is that heavy rainfall occurrences can be very localized,” Lu said. “You see rainfall here and there, and they occur in different periods of the year. We wanted to see if we could combine long-term monitoring data and modeling tools that account for those differences and get a better look at how they affect nitrogen loading.”

Zhang said a better understanding of these trends could inform farm management practices to lessen the likelihood of nitrogen loading in waterways. For instance, farmers could try to apply fertilizers when there’s less likelihood of heavy precipitation events in the forecast, or spread out the application of fertilizers after planting into multiple separate applications rather than a single application or application before crops develop. The modeling data show that these strategies could lessen nitrogen loading in waterways without affecting crop productivity.

Other ISU members contributing to this work include William G. Crumpton, University Professor of ecology, evolution, and organismal biology; and Matthew Helmers, professor of agricultural and biosystems engineering and director of the of the Iowa Nutrient Research Center. Helmers also holds the Brent and Cindy Hart Professorship and a Dean’s Professorship in the ISU College of Agriculture and Life Sciences.