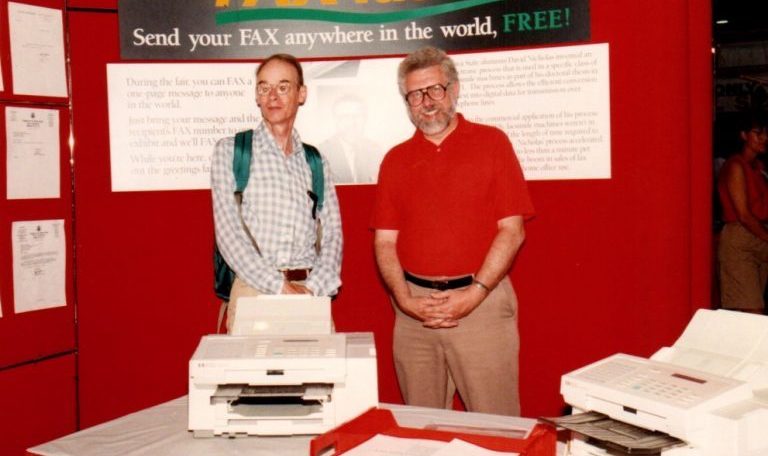 Tom Scott (left) and David Nicholas (right) showcased a fax machine at a 1992 Iowa State Fair exhibit, where visitors could send a fax for free. Photo courtesy of Tom and Lelia Scott
02.8.2021

David C. Nicholas, Iowa State University electrical engineering graduate, passed away on Jan. 14, 2021. Nicholas earned all three of his degrees (bachelor’s in 1967, master’s in 1968 and Ph.D. in 1971) in electrical engineering from what is now ISU’s Department of Electrical and Computer Engineering (ECpE). As a graduate student, he developed and patented a digital encoding process, which led to the development of the first generation of low-cost fax machines, making the machines commercially viable.

Nicholas always enjoyed science; before coming to Iowa State, he participated in science fairs and had an interest in ham radio. He thought about majoring in chemistry, pharmacy or electrical engineering, and he settled on the latter.

As part of his Ph.D. work at ISU, Nicholas developed a filler and synchronization sequence for data-compressing Huffman codes — a process to more efficiently convert text into digital information. 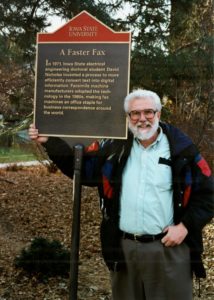 David Nicholas poses with the plaque about his invention, which is located outside the east entrance of Coover Hall.

“My dissertation involved parsing linear delta-modulated voice at 50 kbps into 7 bit words, and then re-encoding these using a Huffman code to obtain 20 to 40 percent compression in real time with minimal buffering,” Nicholas explained. “So I built a simple computer interface, and I would push my delta modulation and recording equipment on a cart from Coover [Hall] over to the chemistry building and use their computer for real-time compression. I had 140 microseconds to process a word, which was about 140 instructions, and I wrote code to do it in about 120.”

“David Nicholas was the most creative person I have ever known,” Scott said. “He was bubbling over with ideas. Every afternoon he would come into my office with a new idea and bounce it off me and ask me if I thought that would work. And usually, I didn’t know.”

Scott was not Nicholas’ major professor — Robert Grover Brown was.

“It’s an arrangement that would be unusual today. I guided his Ph.D. research, but I was not his major professor. That would not happen now, but it did then,” Scott said. “When he was working on his Ph.D., the fax had not yet been invented. His patent [Nicholas’ work was patented in 1972] was actually a coding method. His coding algorithm was for coding voice signals, and his dissertation was, ‘Source codes for the output of a delta modulator operating on speech.’” 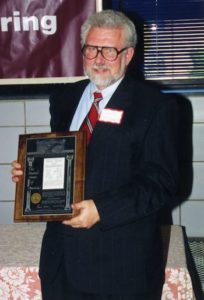 State University licensed the technology to 24 fax machine manufacturers, and with approximately $5 billion in fax sales worldwide between 1985 and 1990, this technology generated more than $36 million in income for Iowa State, the majority of revenue received between 1992 and 1994. Nicholas received a portion of the patent proceeds, and the ECpE department also received a portion, which it used to create the endowed David C. Nicholas Professorship in Electrical and Computer Engineering. Nicholas’ patent is the second-highest-earning patent in Iowa State’s history.

To this day, a plaque stands outside of Coover Hall in Ames, posted in Nicholas’ honor. The plaque reads: “A Faster Fax: In 1971, Iowa State electrical engineering doctoral student David Nicholas invented a process to more efficiently convert text into digital information. Facsimile machine manufacturers adopted the technology in the 1980s, making fax machines an office staple for business correspondence around the world.”

In August 1992, the Iowa State Fair had an exhibit called, “Iowa State University FAX facts,” with a sign that said, “Send your FAX anywhere in the world, FREE!” Underneath the sign, there was a description that read, “During the fair, you can FAX a one-page message to anyone in the world. Just bring your message and the recipient’s FAX number to our exhibit and we’ll FAX it free. While you’re here, check out the greetings faxed to us!” A bright red wall displayed printed fax messages in a grid. Nicholas’ photo was on the wall, too, with information about his patent and invention. Scott accompanied Nicholas to the exhibit and stood with him by the machines.

Scott and his wife, Lelia, emphasized the kindness and loyalty Nicholas displayed throughout his lifetime.

“He was the kindest and most loyal person to his family and to Cedar Rapids,” Scott said. “He had several offers, probably, to make a lot more money if he would go somewhere else, but his mother was in Cedar Rapids, he was born in Cedar Rapids, and he thought Cedar Rapids was the only place he would ever want to be.”

“Dave always included Tom in the honors programs, the president’s dinners and things like that. He included us in his family weddings. He was a wonderful friend,” she said. “I really want to emphasize that Dave was very, very generous and very, very loyal. If there was some event where he was honored, he always asked Tom and me to go along and made sure we were there. A most generous and thoughtful person.”

As a student at ISU, Nicholas received honors from Tau Beta Pi, Eta Kappa Nu and Sigma Xi. After graduating with his Ph.D., Nicholas worked full-time as an engineer at Rockwell Collins, holding engineering and management positions, for 38 years. During his career, he worked in the Advanced Technology group and worked on the development of an Automatic Call Distribution (ACD) system, which he believed was the first commercial digital telephone switching system in the world. He said the system was used by most of the major airlines as an ACD, and by MCI and ITT as a tandem switch. The switch also was used by the Royal Netherlands Air Force in a redundantly connected military system, which was mutually synchronous, a part of which is the subject of U.S. patent no. 4,144,414. Nicholas also worked on mobile satellite communications systems, avionics systems and engineering continuing education programs. He retired from Rockwell Collins in 2009, after a career of significant technical advances in telecommunications and numerous patents.

Nicholas holds 16 patents and was inducted into the Iowa Inventors Hall of Fame in 1992.

“Dr. Nicholas was a treasured member of ECpE family,” said Ashfaq Khokhar, chair of the ECpE department. “His professional accomplishments are towering, and his caring for his alma mater was exemplary.”

“He visited ISU, and we invited many students to the meeting. He was great. He said something that was so interesting.

One of the faculty asked him, ‘What would you like to share with the students who are here?’ He looked around and said, ‘You are doing all of the technical learning; I wonder if you know that in the industry, you need to not only master technical challenges, but also I would like you to know that you will be spending good time writing reports.’

This is a very interesting perspective. It sheds light on the fact that we want our students to have writing, critical thinking and good reporting capabilities.

On two occasions, we teamed up with Rockwell via David for proposal writing and collaborations on electronics and security challenges. He was kind, gracious and very collaborative, and as we all expected, he was technically amazing.”

“I was the holder of the first David Nicholas Professor from 1997 to 2002. I got a chance to meet with David Nicholas in 1997. He was present for the inaugural ceremony. I had a picture taken with him, which is there in my office in Durham 391C.

It has been now 23 years since my meeting with him. My recollection of him is that he was an extremely simple, soft spoken person. Very down to earth. I had a long conversation with him on the research plan, and essentially he left me with a choice to spend the fund as I saw fit. He was very hands off.”

“I was sorry to hear about Dave. I knew him from our old Collins Radio days in Cedar Rapids, Iowa. Dave and I were personal friends over the years. When he struck it rich on his patent, I was very happy. He kept right on working at Rockwell Collins, just as he always did. Dave was a good supporter of my ISU-Collins research and was a true friend of ISU.”