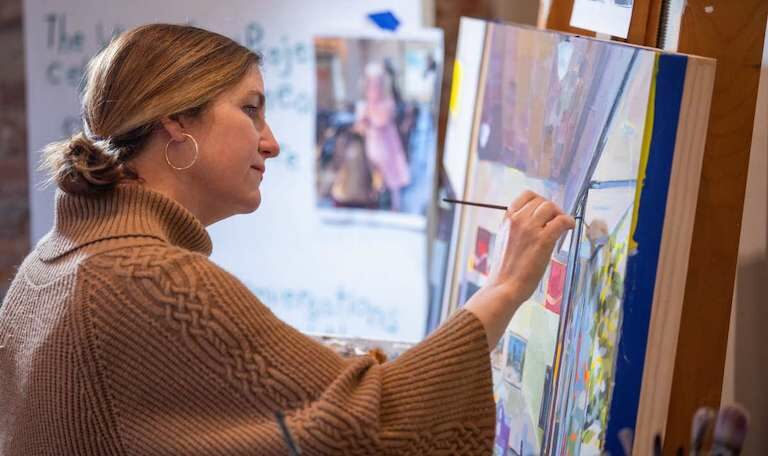 Jennifer Drinkwater, associate professor of art and visual culture and community arts specialist for ISU Extension and Outreach, paints in her studio in downtown Ames. Photo by Christopher Gannon.
04.12.2022

By Iowa State University Office of Strategic Relations and Communications

Who would have thought that a city in the Czech Republic would inspire a study of small towns in Iowa?

That city is Ostrava, and the study is led by an Iowa State University researcher who found that the city’s ability to persevere despite economic change and population decline is surprisingly translatable to rural Iowa.

Kimberly Zarecor, professor of architecture, is head of the Rural Shrink Smart Project, a National Science Foundation-funded, cross-disciplinary study of Iowa’s shrinking small towns — specifically, why some are flourishing rather than dying.

Ostrava was a coal mining and steel mill town. Following the fall of communism in 1989, the prediction was that there would be a mass exodus because of perceptions that Ostrava was an industrial city that was “a little rough around the edges.”

Population has trended downward, but people living there report a strong quality of life. How? Ostrava has become a cultural hub of arts and theatre. Housing is in great condition. There are strong embedded social networks within its neighborhoods.

This phenomenon caught the attention of researchers across Europe in 2009, who developed the concept of “shrink-smart cities”: ones like Ostrava that appeared to be thriving despite population loss. Their research caught the attention of Zarecor, whose career as an architectural historian and specialist in post-war eastern European architecture and urbanism had landed her in Ostrava on a Faculty Fulbright Fellowship in 2011, found the project’s research questions inspiring.

Fast-forward to 2016. Zarecor was looking for a way to conduct research closer to home. Working with Ulrike Passe, professor of architecture at Iowa State, Zarecor connected with researchers across campus, who all saw potential for the shrink-smart concept to be applied to rural Iowa, which eventually led to a $100,000 National Science Foundation grant for the team to kickstart their research.

According to the Iowa Department of Management, there are 941 towns in Iowa – about 75% of which have populations of less than 750. The Iowa Small Town Poll is an ISU survey that measures quality of life in rural Iowa. The poll took place in 1994, 2004 and 2014 and is led by David Peters, professor of sociology and rural sociologist for ISU Extension and Outreach.

“The problem that I observed as a researcher is that nobody’s really having the hard conversation about the fact that most small places will never gain population again,” Zarecor said. “Americans believe that progress is through growth. A place that’s losing people has, in the American context, a negative connotation.

“As a researcher, I wanted to get in underneath the false promise of growth to see what was really going on, to understand why some communities seem to be doing better than others even though they’re shrinking, and to try to start a different conversation.”

And it’s a different conversation than ones happening in big cities like Detroit, which has lost more than half of its population since 1950, according to the U.S. Census. The issues there include vacant houses, under-used utilities and overbuilt roads, which results in a need for rightsizing. Zarecor and her team want to figure out if there’s an equivalent concept in the rural context, which doesn’t have the same infrastructure or economic considerations.

The Glue That Binds a Community

The next leg of the Rural Shrink-Smart Project, funded by a $1.5 million NSF grant, is focusing on learning from six rural Iowa towns where active, dedicated residents – the team calls them “local champions” – are collaborating to maintain and boost quality of life.

This concept of belonging and integration in a community is called “social capital,” part of the Community Capitals Framework developed at Iowa State by Cornelia and Jan Flora, professors emeriti of sociology. Residents are less likely to leave if they feel their quality of life is good or improving. People who moved away might consider returning if they see that they will fit right back in. Newcomers may move if they see that they will be welcomed and integrated.

Jennifer Drinkwater, associate professor of art and visual culture and community art specialist for ISU Extension and Outreach, was invited to the project for her expertise in social capital, which she calls the glue that creates a feeling of belonging in a community.

“Art is not just beautification,” Drinkwater said. “Art projects provide an opportunity for folks who may not get involved in a city council meeting, who may not go to a focus group, who may not answer a survey. But they will show up to a knitting circle, or a music festival or a book reading. You feel like you’re wanted, and you have a place in your community: That’s quality of life.”

Whereas economic development projects often require significant financial investment, quality of life initiatives are typically low-cost and in local control. Drinkwater’s examples of these initiatives across Iowa are countless.

From 2015 to 2016, she led the Intertwine Project in downtown Ames, an effort to create a community art project that would bridge the parallel cultures of Iowa State and Ames. By the end, more than 125 people ages 9 to 93 from 14 states had contributed knitted or crocheted pieces for the project, which “yarn-bombed” the façade of ISU Design on Main.

“I knew I needed to come up with a project that was accessible for people to participate who didn’t self-identify as artists, and yarn was an easy in,” she said. “I don’t know how to knit or crochet, so it forced me to not be an expert and to find and elevate artists in the community to leadership positions in the project.”

The idea was not just to create a massive spectacle. Intertwine brought people together on a regular basis through knitting classes and circles. The project inspired others throughout the state to yarn-bomb and create community within their towns.

“It helped me get clearer about how to effectively and deliberately plan a project to include and create opportunities for folks to show up, rather than having a very small steering committee that plans a mural, hires an outside artist to come in, do something and leave,” she said. “You can get more bang for your buck if you think about it differently.”

This spring, Drinkwater’s students are working with two of the shrink-smart communities – Elma and Bancroft – to generate community artwork ideas. Students are conducting oral history interviews with residents, planning pop-up experiences in the towns, and will present to each community their ideas for ways to leverage these projects.

“Art projects become a source of pride within the community because they’re community- and place-specific,” Drinkwater said. “The project is a constant reminder of, ‘We did that.’ I think we underestimate how important that can be.”

All of this work stems from one of the team’s hypotheses: If collective action is successful in building a stronger identity and sense of belonging in a community, then quality of life perceptions will maintain or increase even as populations shrink.

They’ll see if that holds true following the next Iowa Small Town Poll, which takes place in 2024.

The team hopes that this research and its findings provoke similar data-driven, honest conversations in other small towns in Iowa and throughout the Midwest.

Zarecor says the team will take everything they learn and publish in an open-access online “field guide” for communities, hopefully in 2023 through the ISU Digital Press.

“We are coming in and saying to everyone involved that if we keep staying focused on the population itself as a problem that needs to be fixed, you’re going to lose out on the chance to make your community more stable by keeping people who already live there happy and by potentially recruiting people who want the quality of life that a small town offers,” Zarecor said.

To put it simply, it’s about quality over quantity.