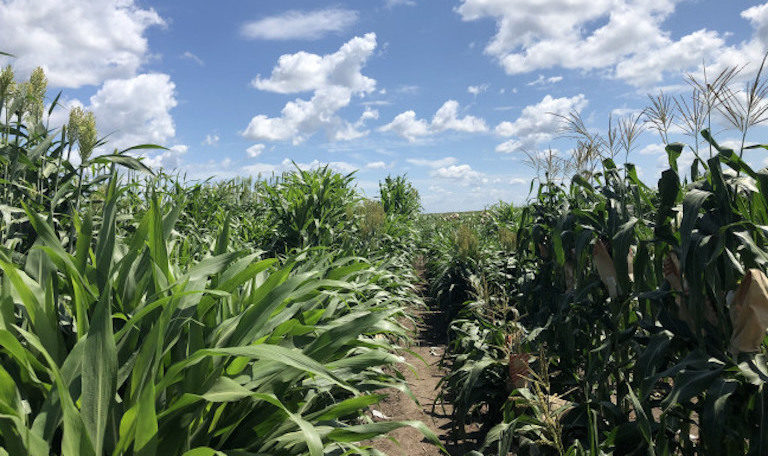 ISU researchers use advanced data analytics to help scientists understand how environmental conditions interact with genomics in corn, pictured here, as well as other crops. Image courtesy of Jianming Yu.
06.9.2021

Scientists have invested great time and effort into making connections between a plant’s genotype, or its genetic makeup, and its phenotype, or the plant’s observable traits. Understanding a plant’s genome helps plant biologists predict how that plant will perform in the real world, which can be useful for breeding crop varieties that will produce high yields or resist stress.

But environmental conditions play a role as well. Plants with the same genotype will perform differently when grown in different environments. A new study led by an Iowa State University scientist uses advanced data analytics to help scientists understand how the environment interacts with genomics in corn, wheat and oats. The results could lead to more accurate and faster models that will allow plant breeders to develop crop varieties with desirable traits.

The study was published recently in the peer-reviewed academic journal Molecular Plant.

Jianming Yu, a professor of agronomy and the Pioneer Distinguished Chair in Maize Breeding, said the study sheds light on phenotypic plasticity, or the ability of crops to adapt to environmental changes. This could help plant breeders get a better understanding of how “shapable” plant species are, or how much potential they have to perform well in different environments.

“We knew that genetic performance is context dependent. It’s not static; It’s dependent on environmental conditions,” said Xianran Li, an adjunct associate professor and the first author of the study. “Two alleles of a gene perform differently in one environment but the same in another. What is challenging is to understand the interplay between genes and the environment under the natural field conditions. The obvious obstacle is that natural environments are much more complex than controlled laboratory conditions. How can we detect the major signals plants perceive?”

The study made use of previously gathered data on the three crop species from across the globe. A group of 17 scientists from four institutions contributed to the current study, but a much larger group of scientists carried out the initial experiments that generated the data. The dataset included 282 inbred lines of corn evaluated in the United States and Puerto Rico; 288 inbred lines of wheat evaluated in Africa, India and Middle Eastern countries; and 433 inbred populations of oats evaluated in the United States and Canada. The data included environmental conditions such as temperature and availability of sunlight. The phenotypic data analyzed in the study included yields, plant height and flowering time, or the window of time during which the plant reaches the reproductive stage.

Advanced data analytics allowed the researchers to develop an environmental index, extracting the major differentiating pattern among the studied natural field conditions. With this explicit environmental dimension defined, how individual genes respond to external signals and collectively lead to the varied final performance of an organism can be systematically evaluated.

“It is like the indiscernible pulses of a plant’s perception of the outside conditions now become visible on a monitor screen,” said Tingting Guo, a research scientist in agronomy and co-first author of the study.

The study “presents an integrated framework that not only reveals the genetic effect dynamics along an identified environmental index but also enables accurate performance predictions and forecasting,” the authors wrote in the paper.

“We are pleased to be able to design such a framework to cover two major research areas, genome-wide association studies and genomic selection (GWAS and GS),” Yu said.

The study found the integrated framework predicted flowering time and plant height accurately, while predictions for yields were more difficult. Li said that’s most likely due to how many different environmental parameters, beyond just temperature and sunlight, affect yield at different growth stages. The research team will continue refining its methods to account for more environmental factors in an effort to better predict yields.

Yu and his collaborators first developed their initial data analytics in sorghum but have since expanded their research to include other major global crops. This could help plant scientists design a better plan for finding varieties to test. Yu said applying advanced data analytics to all the available genomic, phenotypic and environmental data can help breeders zero in on varieties they’re interested in much faster and more efficiently.

“We believe we have the requisite amount of data to make better predictions about plant performance,” Yu said. “Now, we’re trying to gain knowledge and wisdom from the data to guide the real-world decision-making process.”