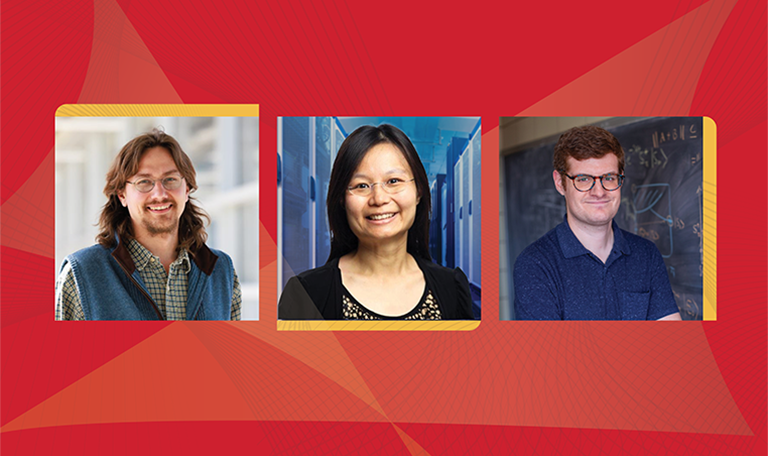 Considered to be the NSF’s most prestigious award, the CAREER program supports early-career faculty who have the potential to serve as academic role models in research and education. The 2022 CAREER awards received by Iowa State research faculty in FY22 represent $1.5 million in federal funding earmarked to pursue research emphases ranging from exploration of quantum computing to better implementation of autonomous systems in society.

“Iowa State aspires to be the most student-centric leading research university in the nation – one that fosters lifelong learning, creates opportunities, and forges new frontiers,” said Vice President for Research Peter Dorhout. “No recognition better reflects these institutional aspirations than NSF CAREER awards because they acknowledge early-career faculty for both the creativity of their research pursuits and their support of our next generation of scholars. On behalf of the university, I’m delighted and proud whenever we have the opportunity to welcome our junior faculty to this elite community of research scholars.”

Thomas Iadecola, assistant professor of Physics and Astronomy and Ames National Laboratory scientist
Proposal Title: New Regimes of Coherent Nonequilibrium Dynamics in Quantum Many-Body Systems
Total Intended Award Amount: $470,284
Quantum computing and quantum information sciences are top priorities in the nation’s scientific agenda and vital to sustaining and enhancing the United States’ competitiveness on the world stage. Iadecola’s project advances these priorities by providing better understanding of how to control the dynamics of quantum information at scales relevant for near-term quantum devices, a precondition for realizing the transformative potential of quantum computing. In addition, U.S. leadership in quantum science and technology requires a robust quantum-ready workforce. The participation of groups traditionally underrepresented in science, technology, engineering, and mathematics (STEM) is essential to leveraging the broadest possible talent base. The education activities that are part of this project will contribute to workforce development by engaging hundreds of precollege and college students with quantum computing concepts in partnership with existing, successful initiatives based at Iowa State. The intended outcome of these educational activities is to elevate students’ interest and involvement in fields relevant to quantum computing and lay the groundwork for future STEM careers.

Tichakorn Wongpiromsarn, assistant professor of Computer Science
Proposal Title: Establishing Correctness of Learning-Enabled Autonomous Systems with Conflicting Requirements
Total Intended Award Amount: $502,352
Autonomous systems — such as driverless cars and mobile robots — are subject to regulatory requirements to ensure general safety. However, establishing priorities among conflicting safety protocols and balancing the unpredictable nature of individual environments makes it difficult to satisfy all requirements under all types of conditions. Wongpiromsarn’s project targets a major gap in theoretical foundations and computational tools to enable practical application of autonomous systems, including learning-based components, environmental operations, and conflicting safety requirements. The effort holds the potential to mitigate the risk of operating autonomous systems in society. Wongpiromsarn’s CAREER project will also integrate immersive education activities for high school, undergraduate, and graduate students to expose them to real-world problems, enable them to join the global community, and ensure the empowerment of future scientists and engineers.

Henry John Duwe, assistant professor of Electrical and Computer Engineering
Proposal Title: Toward Dependable Intelligent Computing on Batteryless Intermittent Devices
Total Intended Award Amount: $523,525
Living in the digital world, intelligent sensors are everywhere. They are inside the usual suspects, like smartphones, appliances, and cars, but they are increasingly showing up in unexpected places and objects. Many sensors and their connected computing devices are constantly connected to a reliable power source like wall outlets. But when sensor nodes are installed in difficult to access areas far away from power sources, they currently require the use of batteries, which can be both financially and environmentally costly. Duwe intends to change that by designing computational systems that can run solely on energy harvested from ambient sources such as radio frequency, vibrations, solar, and thermoelectric. While the amount of power harvested through these techniques would be miniscule, the resulting intelligent sensors would have the capacity to operate for decades. From growing crops to building bridges, intelligent sensors could save time and money and lessen the impact of humans on the environment. Duwe’s CAREER project will also create new hands-on learning opportunities for Cyclone Engineering students. He plans to develop a co-curricular experience for freshman through seniors to fabricate custom computational engines for real-world applications.

Two additional faculty received NSF CAREER awards during FY22 but have recently departed Iowa State for opportunities with other universities.