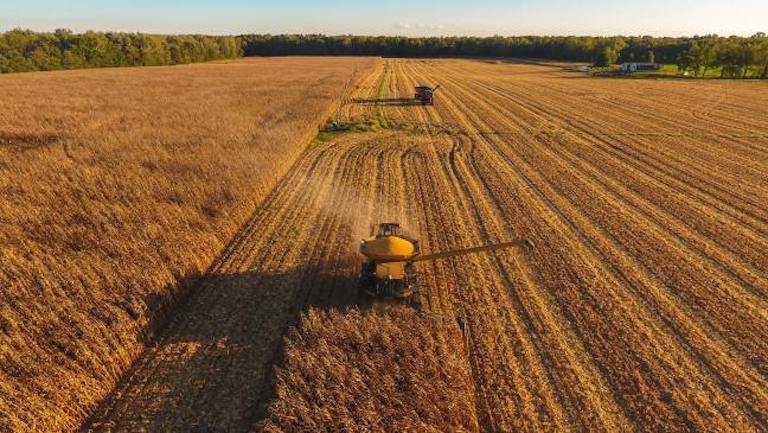 Expansion of agricultural land and the application of nitrogen fertilizers have driven an increase in nitrous oxide emissions from U.S. soils, according to a new study from ISU researchers. Photo by Loren King.
02.16.2022

A recent ecosystem modeling study conducted by Iowa State University scientists shows how crop production in the United States has led to an increase in the emissions of nitrous oxide, a potent greenhouse gas, throughout the last century.

The researchers drew on massive amounts of data on everything from weather patterns to soil conditions to land use and agricultural management practices in order to feed the model and quantify changes in nitrous oxide emissions from soils in the United States. The research, published in the peer-reviewed academic journal Global Change Biology, break soil emissions down by ecosystem types and major crops and found that the expansion of land devoted to agriculture since 1900 and intensive fertilizer inputs have predominantly driven an overall increase in nitrous oxide emissions.

The use of such ecosystem models to assess the sources of nitrous oxide emissions could help guide policymakers as they enact conservation plans and responses to climate change, said Chaoqun Lu, associate professor of ecology, evolution and organismal biology and corresponding author of the study.

“The model we are using is a process-based ecosystem model,” Lu said. “It’s similar to mimicking the patterns and processes of an ecosystem in our computer. We divide land into thousands of pixels at a uniform size and run algorithms that simulate how ecological processes respond to changes in climate, air composition and human activities.”

The study found nitrous oxide emissions from U.S. soil has more than tripled since 1900, from 133 million metric tons of carbon dioxide equivalent (MMT CO2 eq) per year at the beginning of the 20th century to 404 MMT CO2 eq per year in the 2010s. Nearly three-quarters of that rise in emissions originates from agricultural soils with corn and soybean production driving over 90% of the ag-related emissions increase, according to the study.

“Our study suggests a large [nitrous oxide] mitigation potential in cropland and the importance of exploring crop-specific mitigation strategies and prioritizing management alternatives for targeted crop types,” the study authors wrote in their paper.

The rise in emissions corresponds to an expansion of cropland in the United States, Lu said. The computer models found land devoted to agricultural production emits more nitrous oxide than natural landscapes. That’s largely due to the widespread application of nitrogen fertilizers to agricultural land and legume crop production, Lu said. The added nitrogen is partially used by crops, and the remainder either stays in soils or is lost to the environment. During this process, microorganisms living in soils consume nitrogen-containing compounds and give off nitrous oxide as a byproduct. Better understanding the dynamics of which crops lead to the greatest emissions can help shape climate mitigation policy, Lu said. Because more nitrogen fertilizer is applied in corn production on average than other crops, the study found soils where corn is grown tend to emit more nitrous oxide per unit of fertilizer used, Lu said.

The researchers designed mathematical models that mimic ecological processes. The models rely on mountains of data gathered and developed over the course of years, Lu said. The researchers compiled government data on crops, land use, weather and other variables. They also factored in historic and survey data from farmers and other landowners.

The research team also compared the results from their model with real-world data in order to validate their results. For instance, the scientists showed their model’s yield predictions tracked with national yield records dating back to 1925 for major crops such as corn, soybean, wheat, rice and others. That shows the model simulation could track the long-term trajectory of nitrogen uptake that supports increasing crop yield over the past century. They also compared their model’s nitrous oxide emission predictions to real-world data collected from multiple natural and managed soils across the nation, as well as time-series measurements from a central Iowa corn-soybean rotation site over the course of seven years.

“Our group has spent lots of time improving model performance and developing the driving force history, including natural and human disturbances, for the model simulations,” Lu said. “Behind the scenes, there are thousands of lines of algorithms to guide the computer model to make predictions. It takes decades of efforts, and more to come, to reduce modeling uncertainties and incorporate better ecological process understanding resulting from the hard work of field scientists.”