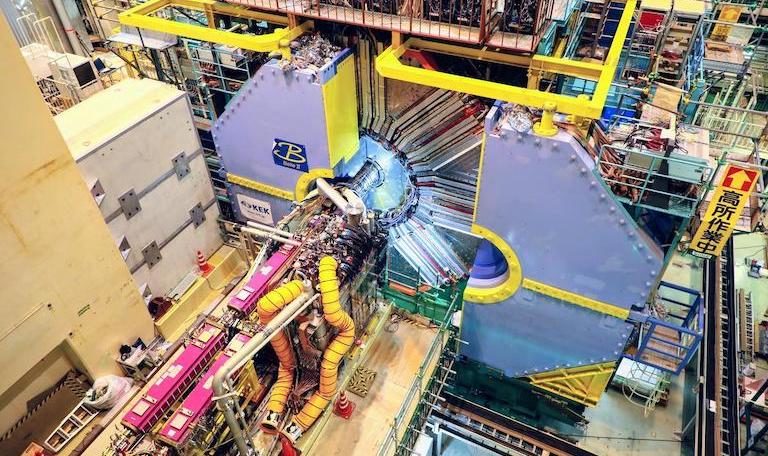 Three Iowa State University physicists have spent the past decade helping to upgrade hardware and untangle messy proton-proton collisions at the Large Hadron Collider in Europe.

One result of their work is that the three have their names – Chunhui Chen, Jim Cochran and Soeren Prell – on the 2012 research paper describing how the collider’s ATLAS detector observed a new particle later confirmed to be the long-sought Higgs boson. The Higgs is the source of mass in subatomic particles. It’s one of the things that makes the universe as we know it possible.

That’s the kind of new physics that physicists like to talk about, the kind that, in this case, led to the 2013 Nobel Prize in Physics going to Peter Higgs and Francois Englert. In 1964, the two independently theorized how particles acquired their masses, ideas ultimately confirmed in the Large Hadron Collider.

So, with the collider’s record of discoveries at the highest energies in particle physics, why would the Iowa State physicists consider leaving their work at ATLAS? Why join a smaller experiment known as Belle II at Japan’s High Energy Accelerator Research Organization?

“It’s to follow the physics,” said Jim Cochran, a professor of physics and astronomy, who also had a leadership role with the U.S. operations of ATLAS.

The Iowa State physicists have completed their work on hardware upgrades for ATLAS. That included development of quality-control techniques for the production of supports to hold and cool sensors and electronics for the experiment’s new Inner Detector. That’s the inside layer of the multi-layered detector, the layer closest to the colliding protons and, sometimes, colliding lead ions.

That upgrade was in the context of a major upgrade to the Large Hadron Collider – all with the goal of collecting better data as the accelerator creates more and more high-energy collisions inside its four major particle detectors set along a 17-mile ring. More collisions per second mean greater “luminosity” and more data. Physicists say they need both for any new discoveries at the Large Hadron Collider.

These upgrades, however, will take years.

“While the potential for new physics after the major upgrade is great, that is at least eight years away,” Cochran said.

Belle also has connections to a Nobel Prize in Physics – the 2008 prize that recognized Japanese physicists Makoto Kobayashi and Toshihide Maskawa for their 1972 theory explaining how nature favors matter over antimatter. The Belle and BaBar (at Stanford University in California) experiments detected the broken symmetry predicted by the two.

The experiment collides negatively charged electrons with their positively charged, antimatter counterparts, positrons. Those are relatively clean collisions that allow detectors to more precisely track and measure the particles that fly from collisions.

First collisions in the upgraded particle accelerator known as SuperKEKB happened in the spring of 2018. The experiment has steadily increased its luminosity since, the beams of colliding particles getting more focused and more intense, making the experiment on course to create 40 times more collisions and data than the original Belle experiment.

The experiment set the accelerator luminosity record last June. (It’s a big number of particles, 2.4×1034, per square centimeter per second.)

“By making these huge data samples, the experiment can make huge contributions to the field,” Chen said.

The Iowa State physicists – who bring diverse research experiences from Fermilab in Illinois, the SLAC National Accelerator Laboratory in California (which featured similar electron-positron physics) and the European Laboratory for Particle Physics in Switzerland – applied to join the Japan-based experiment in September 2019. They supported their initial work at the experiment with their own university funding.

“Getting funding right away is good evidence that the DOE has noted our work,” Chen said. “We’re very happy for the support and the confidence in us.”

Soeren Prell, also a professor of physics and astronomy, is supposed to be at Belle II this semester. But, like all international travel for university business, the trip to Japan for his professional development assignment has been suspended.

But he’s doing what he can from Ames to help advance the experiment’s examination of some important topics in particle physics: looking for more evidence to explain how matter came to dominate the universe; and searching for clues to explain dark matter, which accounts for 85 percent of the mass in the universe but is still largely a mystery.

Prell’s work from home also includes administrative tasks such as making sure remote shifts in the Belle II control room are covered by physicists from America, Canada and Mexico. (He’s also been trained for control-room duty and will start taking shifts this spring.)

Prell said that kind of leadership role was another reason to make the move to Belle II, an international collaboration of nearly 1,000 physicists and engineers from 115 institutions in 26 countries.

“ATLAS has 3,000 collaborators,” he said. “Belle II is a relatively small collaboration by ATLAS standards. Now we can play a more consistent role. We’re taking more positions of responsibility on committees and task forces. We have higher visibility than we had at ATLAS.”

Cochran, for example, is leading an effort to increase the diversity of the U.S. effort on Belle II. Chen is also chairing a committee that will analyze some of the data from the experiment. And all three – with the help of a team of postdocs and graduate students – are assisting with a subsystem of the Belle II detector, the outer-layer hardware known as the KLM (long-lived kaon and muon) subdetector.

The group’s KLM duties include run coordination, a job taken on by Keisuke Yoshihara, a postdoctoral research associate who’s based at Tsukuba and has just accepted a faculty position at Japan’s Nagoya University.

That growing responsibility in Belle II’s search for new physics at the intensity frontier, Chen said, is more “good evidence that we’re doing things on the right track.”