In Iowa, the vital role research plays – in keeping us healthy, in growing our economy, in maintaining our competitiveness in today’s global market, and in keeping our world sustainable for generations to come – has never been greater. So, it is significant that during the 2021 fiscal year that ended June 30, 2021, the research community at Iowa State overcame the adversity and challenges of the COVID-19 pandemic to attract more than $230 million in federal and non-federal sponsored funding to sustain the university’s land-grant research mission.

Peter Dorhout joined Iowa State in late January 2021 as the new Vice President for Research. He had previously served in the same role at Kansas State University.

“I came to Iowa State at the height of the pandemic. I was immediately struck by the spirit of innovation I saw in the university research community,” Dorhout said. “Certainly, FY21 was far from ‘business as usual,’ but the faculty, staff and students here never wavered. They explored and adopted new systems and processes to keep the university’s research enterprise running. They stayed committed to relevance and purpose, whether it’s unearthing answers to larger questions through fundamental research, or applied research that translates to new innovations that can be commercialized to grow our economy and benefit our society. To me, this is what sets Iowa State apart and brings funding agencies, companies, and private sponsors back year after year.”

Iowa State is committed to helping the State of Iowa become the best version of itself that it can possibly be through research and innovation that supports Iowa economic growth priorities such as the Biosciences and Manufacturing 4.0, as well as the health and wellness of our people and planet.

While there are many examples of this commitment in the wide-ranging research conducted at Iowa State, three particular projects receiving funding for the first time in FY21 stand as shining examples.

First, is the ARA Wireless Living Lab for Smart and Connected Rural Communities that the Platforms for Advanced Wireless Research (PAWR) introduced near the close of FY21 as the fourth testbed in a diverse portfolio of large-scale research platforms located throughout the U.S. The new platform that Iowa State and its partners are rolling out complements earlier PAWR platforms with an added focus on technologies for enhancing rural broadband connectivity.

An NSF grant, administered through PAWR, will provide $8 million in federal funding and a matching investment in the form of cash and in-kind contributions from PAWR industry consortium partners. In addition to $7 million from NSF, the ARA project – led by Iowa State Electrical and Computer Engineering professor Hongwei Zhang – received another $1 million in financial support from USDA’s National Institute of Food and Agriculture (NIFA).

“ARA is critical for elevating broadband and bridging the connectivity divide between urban and rural areas in the state and the nation as a whole,” Dorhout said. “Enhancing rural broadband is vital for supporting our state’s growth in the Biosciences – in digital and precision agriculture in particular – and in making industry and manufacturing in rural areas more vital and competitive. Increasing connectivity will also fuel greater innovation and entrepreneurship across the rural landscape, which contributes to the economic sustainability of our communities.”

Second, are a series of projects that are elevating Iowa State and Ames Laboratory, a U.S. Department of Energy (DOE) National Laboratory, into a national research epicenter for the rapidly emerging field of plastics upcycling. Contrary to traditional recycling, which recovers base materials from items such as glass bottles or aluminum cans and reuses them to recreate the same product, upcycling creates higher-value products from plastic items by chemically transforming them.

Anston Marston Distinguished Professor in Engineering and director of the Bioeconomy Institute, Robert Brown, received an award of $2.7 million from the Defense Advanced Research Projects Agency (DARPA). The funding is being used to create a system that converts plastic wastes generated by military forces into fatty alcohols and fatty acids that can be used to create food sources. This is just one of several DOD and DOE awards received in FY21 by Brown and other ISU faculty, including Chemistry professor, Aaron Sadow, and Chemical and Biological Engineering professor, Eric Cochran, among others.

“The innovative work in plastics upcycling that is being spearheaded by Doctors Brown, Sadow, and Cochran – among others on campus – is exciting not only for the economic opportunities it can provide, but even more for the creative solutions it can generate for resolving the world’s mounting issues with waste,” Dorhout said. “This work is an important step toward a more sustainable future.”

Third, is a project being undertaken by Elizabeth Stegemoller, assistant professor of Kinesiology. The National Endowment of the Arts (NEA) awarded Stegemoller $90,000 to support her work in exploring the mechanisms of group singing in persons with Parkinson’s disease.

Nearly 90% of people with Parkinson’s disease (PD) experience voice impairments and difficulties in breathing, airway protection and swallowing that are primary factors leading to death from PD. Previous research conducted by Stegemoller and her team (Elizabeth Shirtcliff and Marian Kohut) has demonstrated that group therapeutic singing (GTS) significantly improves voice, respiratory and swallow outcome measures among patients with PD. Study participants have also reported feeling less stressed and a greater sense of community and support. While Stegemoller and her team theorize that improvements in symptoms may be due to reduced stress, the long-term benefits are unknown. At the completion of this study, Stegemoller expects to have determined the long-term effects of GTS on voice, respiratory and swallow outcome measures, as well as stress (changes in cortisol levels and inflammatory cytokines) and clinical motor symptoms.

“Enabling healthy lives is one of our grand challenge themes at Iowa State,” Dorhout said. “Dr. Stegemoller’s project is improving the health and wellness of people in our communities, and it serves as a valuable reminder that even a relatively modest investment in research can deliver a major impact.” 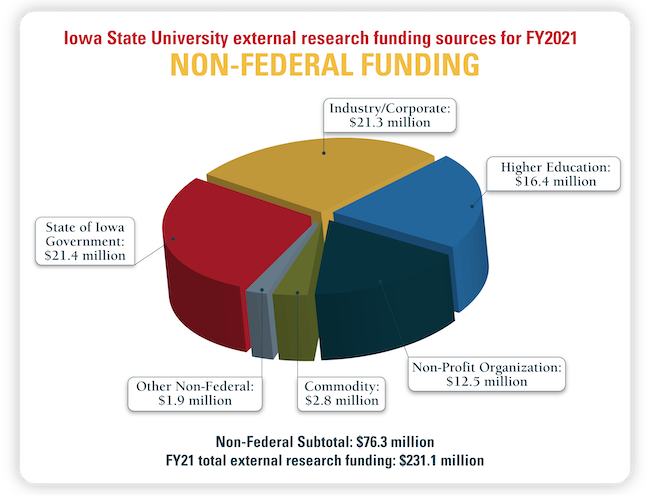 Both NSF and DOE annually recognize the valuable contributions of early-career faculty at research and academic institutions such as Iowa State. During the 2021 fiscal year, five Iowa State faculty received NSF CAREER awards, and more than $4 million in funding, to pursue research emphases ranging from exploring cellular functions to implementing the use of smart data. This fiscal year’s NSF CAREER recipients include:

Iowa State and university faculty are committed to purposeful research, whether it’s foundational research that contributes the building blocks to greater exploration and understanding, or translational research that leads to new innovations and technologies that benefit society. The purpose that drives most research at Iowa State is defined by these five grand challenge themes that are core to the university strategic plan:

Click here for more details on just a few examples of Iowa State research that is tackling some of society’s greatest challenges.