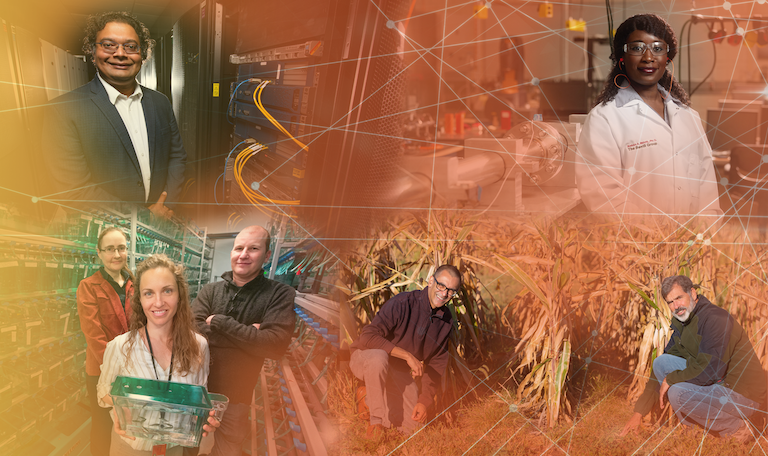 Iowa State University Research achieved new heights in external research funding in large part because of faculty and staff who are committed to the principles of creativity, partnership and innovation.
07.13.2022

“At Iowa State, we aspire to be a university that creates opportunities and forges new frontiers as well as a collaborative partner for proactive and innovative solutions,” said Vice President for Research, Peter Dorhout. “Even during the height of the pandemic that impacted the 2021 fiscal year, the Iowa State research enterprise never really shut down. Nevertheless, it would be disingenuous to say it didn’t have some effect, particularly on our people. The 2022 fiscal year reflects the resolve and excellence of our research faculty and staff and demonstrates that our partners in federal agencies, and in industry and non-profits, truly value the creativity, expertise, and innovation that the Iowa State research community brings to society’s greatest challenges.”

Certainly, one of those challenges is feeding our ever-expanding global population while not only sustaining, but regenerating our precious, but dwindling croplands. Two of the most significant awards Iowa State received in FY22 share a focus of improving agricultural sustainability and productivity.

The use of cover crops in production agriculture has proven to deliver tremendous benefits in soil health, conservation, and nutrient management. A diverse team of 18 Iowa State scientists, led by D. Raj Raman, Morrill Professor of Agricultural and Biosystems Engineering, is exploring and developing new approaches to cover crops that use perennial ground covers, such as Kentucky bluegrass, which could break down barriers to farmers adopting cover crops more broadly. Raman and his team received a grant of nearly $10 million from the U.S. Department of Agriculture (USDA) National Institute of Food and Agriculture (NIFA) for their five-year project.

At the beginning of the 2022 fiscal year, Iowa State was selected to be the home base for the AI Institute for Resilient Agriculture (AIIRA), one of 11 new NSF AI institutes announced in July 2021. USDA-NIFA is providing $20 million over five years for the project, which is led by Baskar Ganapathysubramanian, Joseph C. and Elizabeth A. Anderlik Professor in Engineering. AIIRA includes collaborators from Carnegie Mellon University, the New York University Tandon School of Engineering, the University of Arizona, the University of Nebraska-Lincoln, George Mason University, the University of Missouri and the Iowa Soybean Association. Scientists at all the participating institutions are bonded by a common belief that artificial intelligence can accelerate the productivity and sustainability of agriculture at this critical juncture in our world’s history.

As climate change accelerates, so too does our need to remove carbon from the environment. Kejin Wang, Wilson Engineering Professor in Civil, Construction and Environment Engineering, received a $60,000 one-year award from the Iowa Department of Transportation (IDOT) to explore a unique alternative. The state of Iowa, with 72 operating coal-fired electrical power plants, is in the upper third of states using coal to generate electricity. This coal-fire process produces waste materials – ash and carbon dioxide – that can be potentially sequestered in high-quality carbon-injected new concrete constructions, such as highways. Wang and her team will explore injecting carbon dioxide into waste ashes to optimize concrete quality and performance, while also removing harmful carbon from the environment.

“Whether it’s fundamental or translational research, an award in the millions or more modest award in the thousands, Iowa State’s research faculty and staff are committed to working with partners in federal and state agencies, industry and non-profits to find answers that make our world better,” Dorhout said.

Here is a closer look at both federal and non-federal research funding for FY22. 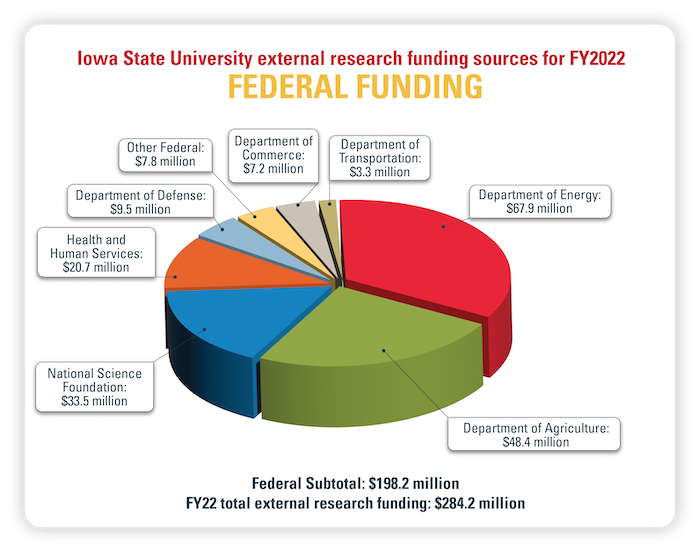 A major contributor to Iowa State’s record amount of federal sponsored research funding in FY22 was the record-setting support the university received from the U.S. Department of Agriculture (USDA). The $48.4 million in research funding Iowa State received from the agency in FY22, surpassed the previous benchmark of $47.8 million established in FY20, and was $18.3 million, or 60.8%, more than the university received in FY21. 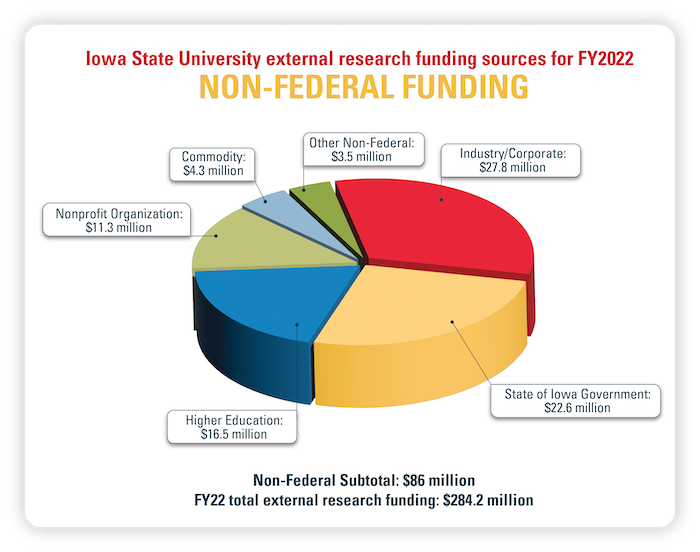 Increases in Industry/Corporate and State of Iowa Government funding were key contributors to FY22’s record-level non-federal research funding. Support from Industry/Corporate sources totaled $27.8 million, up nearly $6.6 million – or 30.8% — from FY21, and a new university record for this category. Research funding from State of Iowa Government agencies increased from $21.4 million in FY21 to $22.6 million in FY22, a 5.5% increase.

During the 2022 fiscal year, five Iowa State faculty received NSF CAREER awards, and more than $1.7 million in funding, to pursue research emphases ranging from exploration of quantum computing to the ecological fallout from species extinction. This fiscal year’s NSF CAREER recipients include:

Lisa Schulte Moore, professor of Natural Resource Ecology and Management and co-director of the Bioeconomy Institute at Iowa State, was named a 2021 MacArthur Fellow. She is the first ISU faculty member to receive a MacArthur Fellowship. The prestigious awards – sometimes called “genius grants” – identify scientists, artists, entrepreneurs and others who have demonstrated exceptional creativity and who show promise for important future advances.

Our ever-changing world is impacted on a daily basis by countless challenges. Iowa State has identified five grand challenges that are exceptional fits for the university’s areas of expertise and excellence:

Click here for more insight into just a few new FY22-funded Iowa State research projects that are tackling some of society’s greatest challenges.