Graduate student Allen Chen uses the light box he made to take photos of perennial cover crops in a test field west of Ames in September.
10.3.2017

They were awarded a National Institute of Food and Agriculture grant this year as part of the agency’s effort to support research on agricultural systems and production of biomaterials and fuels. Ken Moore, David Laird, and Andy Lenssen, all professors of agronomy, and Shui-zhang Fei, associate professor of horticulture, make up the team.

The team is studying turfgrass species to be used as perennial cover crops since they do well in cooler weather, Fei said. They planted several varieties of turf grasses in field trials west of Ames this fall to see which do not compete with corn production while still providing environmental benefits.

This is different from the annual cover crops Iowans have come to recognize.

Annual cover crops such as winter rye are planted in the fall and remain over winter. The cover crop is terminated in the spring before the row crop is planted. Perennial cover crops, on the other hand, stay in the ground year-round. They’re often used in orchards and some fruit crops.

An Iowa Nutrient Research Center report shows that cover crop acres planted through government financial assistance have increased dramatically in Iowa, from nearly 36,000 acres in 2011 to more than 317,000 acres in 2015.

None has perennial cover crops.

“The reason they’re not used is they may function as a weed and suppress yield,” Laird said. “Our theory is that if we get the right genetics, the right type of cover crop, and the right management, together we can eliminate that yield drag.”

Farmers cannot be expected to adopt a practice that could decrease production, the researchers pointed out.

“We need to make it bulletproof so farmers can actually use it,” Laird said. 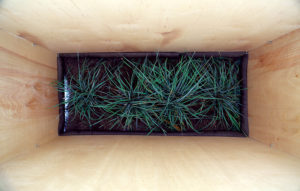 Perennial cover crops are seen peering through the opening in the light box made by graduate student Allen Chen.

Years ago, while studying how different plants can be compatible, it occurred to Moore and other ISU researchers that a row crop might be able to grow alongside a cover crop without reducing yield.

Since then, he’s been trying to perfect the system, creating an environment in which the row crop and cover crop “could grow in a mutualistic way.”

In a perennial cover crop system, a continuous network of roots binds soil and nutrients. Instead of being lost during heavy rains, nutrients such as nitrogen and phosphorus are recycled back into the soil – reducing nitrate leaching and lowering the amount of fertilizer needed.

“One of the biggest problems with production agriculture as we know it and practice it today is the fact that the soil is bare for two-thirds of the year,” Laird said. “That leaves it vulnerable to erosion and nitrate leaching. If we can get a cover on that surface year-round, that changes things.”

Lenssen said nitrate leaching is also a direct economic loss to farmers because they need to apply more fertilizer.

“Nitrate leached is nitrate not used by corn,” he said.

Not only does nitrate leaching have a detrimental environmental impact, it places a financial strain on farmers as they have to replenish the nutrients lost with more fertilizer.

“Cover crops are a win for the farmer since they use less fertilizer,” Laird said. “And it’s a huge win for society, reducing the nutrient load in our rivers and improving water quality.”

Having a cover crop on the ground year-round means being able to harvest larger quantities of corn stover (what’s left in a field after harvest) since there would be less soil at risk of erosion.

“With modern corn hybrids, the amount of stover being left on the surface has greatly increased over the years and it’s too much right now,” Laird said. “One of the reasons farmers grow in a corn-soybean rotation is that soybean year gives them an extra year for the corn residue to decompose.”

This could mean more corn stover available to be used for bioenergy, such as ethanol production, or other purposes, such as cattle feed.

“You think back 150 years in Iowa and the landscape was predominantly prairie,” Moore said. “We had very little soil erosion or water quality issues. It’s what happens in that winter landscape today that’s really devastating to the environment.

“We’re trying to put a cover crop out there the other half of the year that intercepts the moisture and prevents soil erosion and hopefully cycles nutrients – all without compromising crop production.”