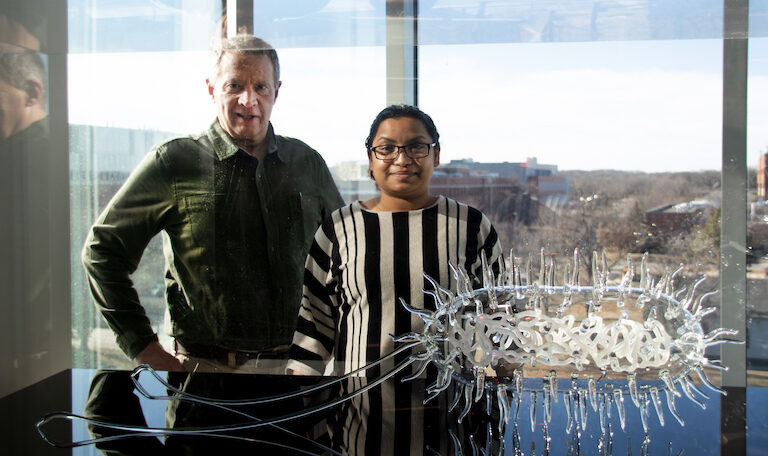 Two Iowa State University researchers have been selected to receive funding from the 2022 Margaret B. Barry Cancer Research Program to explore bioengineering probiotics to destroy the types of tumors seen in cancer patients.

Administered by the Iowa State University Office of the Vice President for Research (OVPR), the Barry award is given each year to faculty or professional and scientific (P&S) researchers to further cancer research, specifically within the College of Veterinary Medicine. Professor of veterinary microbiology Gregory Phillips and associate professor of chemical and biological engineering Rizia Bardhan were recently named the recipients of the annual award and will receive $120,000 in institutional funding over two years. The pair will use Barry award funding to investigate the possibility of genetically engineering strains of probiotic bacteria to target and eliminate the specific types of cancerous tumors typically found in patients with breast and colorectal cancers, with the long-term goal of reducing negative side effects of traditional cancer treatments and improving outcomes for patients with inoperable cancers.

When most people think of probiotics, they likely think of yogurt, fermented foods, or the capsules found at grocery stores that doctors recommend to patients taking antibiotics. But at a foundational level, probiotics are much more than their most well-known identity as a supplement to support digestive health. They are a type of bacteria — albeit a beneficial one — and as such, they serve as living microorganisms with the capacity to influence the human immune response.

Although the general idea of using specific microorganisms to naturally colonize tumors is well-established within the medical community, there is new interest in cancer research to develop safer and more effective treatments that take advantage of the tumor-targeting ability of microorganisms. As outlined in Phillips’ and Bardhan’s Barry-funded research proposal, titled, “Probiotics-Mediated Cancer Therapy: A New Approach for Tumor Targeted Treatment,” probiotics will be reframed as a new tool for harnessing the human microbiome to meet this need. Specifically, their research team plans to develop new strains of the probiotic Escherichia coli Nissle designed to display simplified versions of antibodies on the surface of bacterial cells to target breast and colorectal cancer tumors. Once the bioengineered probiotic bacteria have identified specific tumors, they will release tumor-destroying molecules to reduce or eliminate the tumor as part of a strategy the team refers to as probiotic-mediated cancer therapy (PMCT).

The approach also has the potential to be used for early tumor detection and visualization. This process serves as a critical determinant of patient outcomes among individuals with both breast and colorectal cancers, which are – according to the American Cancer Society – the most common cancer found in U.S. women and the third most common cancer diagnosed in both men and women in the U.S., respectively.

“Probiotic bacteria, by their nature, have genes that are expressed to produce products that are beneficial to the host, such as reduction of inflammation,” Phillips said. “We are expanding that idea by introducing capabilities that naturally occurring probiotics do not have but can be programmed to perform. This type of project is called high-risk high reward for a reason. If it works, it could make a significant impact. That’s the value institutional seed funding opportunities like the Barry award bring to faculty.”

In addition, Phillips’ and Bardhan’s research project will attempt to alleviate the negative side-effects of traditional radiation, drug therapies, and invasive surgery used to treat many cancer patients. The proposed PMCT approach holds the potential to act like a “magic bullet” treatment, targeting specific tumors without damaging healthy tissue, as well as improving on traditional therapies that can fail to penetrate deep into drug-resistant tumors.

“When we think about chemotherapies and radiation, they are not specific to cancerous tissues, they target and destroy both cancerous and healthy tissues alike,” Bardhan said. “For highly aggressive tumors that are untreatable with drugs or cannot be removed through surgical means, standard of care is simply not effective. But a probiotic specifically engineered to target such tumors would have the ability to treat such tumors by entering the blood vessels surrounding the tumors and delivering treatment. Our strategy is to use a technology that is well understood, but also highly biocompatible in humans.”

The first year of Phillips’ and Bardhan’s Barry award funding will be used to develop engineered bacteria and begin the process of characterizing them, with the project’s second year expected to focus on intervention trials in model systems that demonstrate cancer treatment efficacy.

After initial investigation, successful use of the PMCT strategy has the potential to be expanded and applied to a host of additional cancer types beyond just breast and colorectal cancers.

“Cancer is a disease that touches every one of us at some point, either directly or indirectly, which is why it is such an honor for the Office of the Vice President for Research to administer the Margaret B. Barry Cancer Research Program Award,” said Vice President for Research Peter Dorhout. “The work that Dr. Phillips and Dr. Bardhan are spearheading has the potential to revolutionize the way breast and colorectal cancer – and possibly other cancers – are treated. Through probiotic bacteria, it’s possible to imagine less invasive treatments that deliver more efficacy and a better quality of life for those undergoing cancer treatment.”

The Margaret B. Barry Cancer Research Program award, established in 2005 with an estate gift from Margaret Barry, is open to all eligible Iowa State University faculty and P&S researchers (meeting the family/profile for PI eligible criteria) in the College of Veterinary Medicine. More information about the application, review, and award process can be found here.