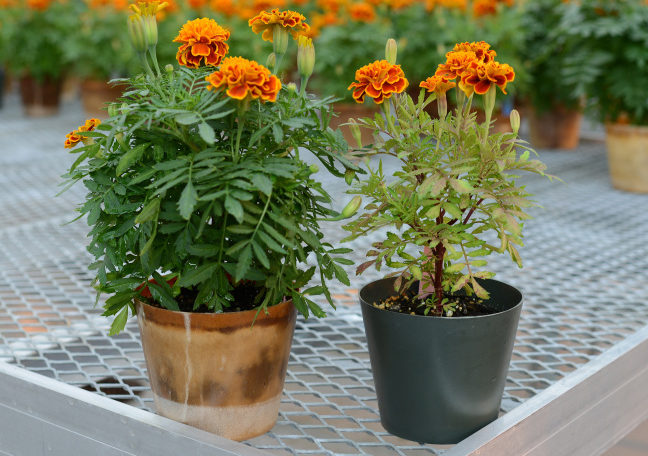 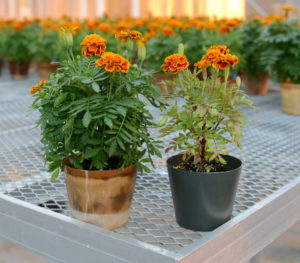 AMES, Iowa – New bioplastic materials may enable gardeners to tend their plants more sustainably and could even help plants “self-fertilize” and grow healthier roots, according to research conducted by Iowa State University horticulturists.

Bioplastics present a range of environmental advantages, such as improved biodegradability, that conventional petroleum-based plastics can’t claim, said William Graves, associate dean of the ISU Graduate College and professor of horticulture. Graves, along with James Schrader, an associate scientist in horticulture, and a team of researchers recently concluded a five-year study of bioplastics in an attempt to identify materials that show promise for horticultural uses, such as the plastic pots and flats that retailers use to sell immature plants.

Bioplastics come from renewable biological sources, such as plants, and large-scale adoption in the marketplace could ease dependence on fossil fuels, he said.

The study looked at numerous options for bioplastic derived from sources such as polylactic acid and the more biodegradable polyhydroxyalkanoates. They also included byproducts that result from the production of corn, soybeans and ethanol.

“We narrowed the available materials down to a small number and found a handful of options that can be the solutions, depending largely on the length of use,” Graves said.

They found bioplastic containers have the potential to offer another major advantage that petroleum products can’t:  the ability to self-fertilize plants.

Graves said plastics made from bio-based materials can release nutrients as the plastic degrades. That may lessen the workload for gardeners, and it also encourages root growth that will improve a plant’s performance once transplanted into soil or into another container, he said.

The study, funded by a $1.94 million grant from the U.S. Department of Agriculture’s National Institute for Food and Agriculture, turned up some surprising results while conducting market research on consumer preferences regarding bioplastics. The researchers expected consumers to prefer bioplastic products that resembled petroleum plastics as closely as possible in appearance, color and texture. The results, however, showed some consumers wanted something different from more environmentally friendly options.

“A lot of people want a biocontainer to look earthy and not artificial,” Graves said.

That preference might free bioplastic manufacturers from the need to recreate the appearance of conventional plastics, he said.

The study concluded that pots derived from bioplastic cost between two and 11 cents more per unit to manufacture than pots made from conventional petroleum plastics. But Schrader said some gardeners may be willing to pay a little extra for products they perceive as helpful for the environment. He sees bioplastics as an opportunity to cater to a niche market that could expand over time.

“Our results show that people may be willing to pay a premium for sustainability and for the fertilizer option,” Schrader said. “The market will start small, with smaller growers selling to environmentally minded clients, but that’ll get the ball rolling, and market share will evolve as prices for bioplastic approach equilibrium with petroleum-based plastic.” 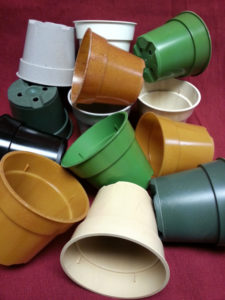 The ISU researchers studied a wide range of bioplastic materials and narrowed their focus to a handful of options. Image courtesy of James Schrader.

Bioplastic may offer gardeners a more sustainable alternative to petroleum-based pots and flats, according to Iowa State University research. Although more expensive to manufacture than conventional plastics, bioplastics someday may grow beyond a niche market, said ISU experts.

“Our results show that people may be willing to pay a premium for sustainability and for the fertilizer option. The market will start small, with smaller growers selling to environmentally minded clients, but that’ll get the ball rolling, and market share will evolve as prices for bioplastic approach equilibrium with petroleum-based plastic.”