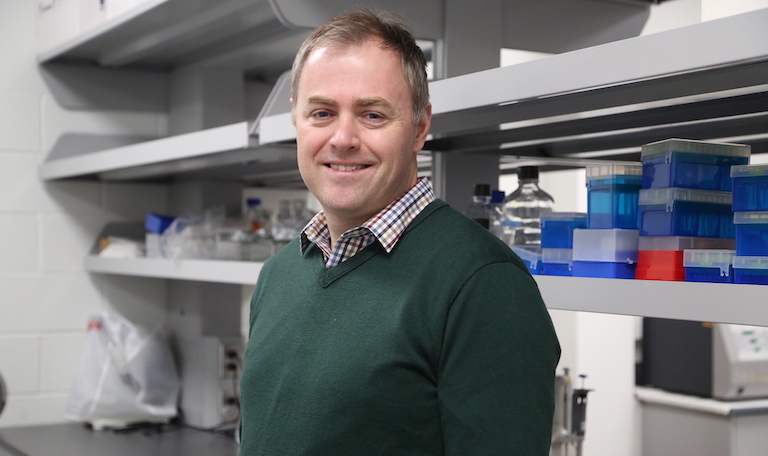 An Iowa State University researcher is launching efforts to develop a vaccine for a currently incurable mosquito-borne illness with the help of a Bailey Research Career Development award.

Administered by the Iowa State University Office of the Vice President for Research (OVPR), the Bailey Research Career Development award is given each year to faculty whose work is high-risk, high-reward and addresses emerging scientific, technical, or societal problems. Michael Kimber, a professor in the Department of Biomedical Sciences, recently received the annual award and will use it to research how to better understand and ultimately prevent the tropical disease lymphatic filariasis (LF) through creation of a vaccine.

Affecting more than 120 million people worldwide — primarily in Asia and Sub-Saharan Africa — LF is caused by parasitic worms transmitted through the bite of infected mosquitos. Although not a deadly illness, LF invades the human vascular system and causes extreme, elephant-like limb swelling, skin conditions, and long-term disability. Kimber will receive $150,000 in Bailey funding over three years to study the disease.

“This disease is often called a ‘neglected tropical disease,’ because there isn’t a significant amount of money allotted to researching it as compared to the amount of suffering it causes,” Kimber said. “Most people don’t know this disease exists, yet millions have it. Any time researchers can get money to study diseases like LF, explore them, investigate them, it’s a great opportunity.”

Currently, the only method for combating LF is mass chemotherapy, which can be used to prevent new infections among at-risk individuals. But there are no drugs capable of effectively killing the adult parasites that cause the disease, rendering established infections incurable. Kimber’s research will focus on studying a set of newly-identified proteins that could prove vital to better understanding how the parasites manipulate the human immune system at a cellular level. With that knowledge in hand, Kimber believes a historically elusive LF vaccine protocol could be developed.

“Parasitic worms are really difficult to control,” Kimber said. “They’re incredibly complex, so designing a vaccine against them has been hugely challenging. We know that parasites trick and evade the human immune response, but we have really struggled to understand how they do it. The focus of our Bailey award is split into two parts to address that challenge, generating new knowledge and using that knowledge to create something translational that can impact the health of millions of people.”

Kimber’s Bailey award funding is guaranteed for two years, with third year funding dependent on project progress at the end of the second year. Although creation of a market-ready LF vaccine will not be possible within the award’s three-year time frame, by 2023, Kimber hopes to have the necessary data in place for future vaccine development.

“Lymphatic filariasis negatively affects the lives and wellbeing of tens of millions of people, yet research and discovery into the disease has been historically under-funded,” said Sarah Nusser, Iowa State University vice president for research. “This project is a great example of the value and importance of the Bailey award. The funding it provides will support critical foundational research that can serve as a stepping stone for translational research, which could ultimately deliver a long-term solution to this harmful but frequently overlooked disease.”

The Bailey Research Career Development award, established in 2002 with a gift from Carl A. and Grace A. Bailey, is open to all Iowa State University full-time tenured associate professors and professors. More information about the application, review, and award process can be found here.