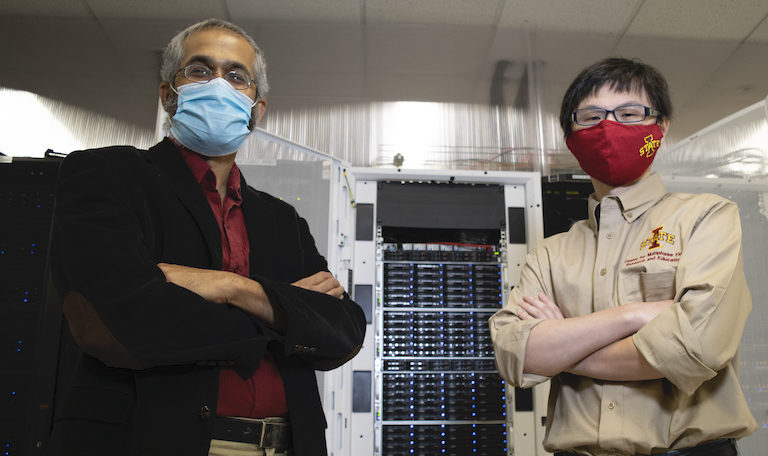 As the damaging effects of climate change become more apparent, researchers are studying ways to generate energy with minimal impact on the environment. Computer simulations could be the key to making this process more efficient.

Shankar Subramaniam, a professor of mechanical engineering at Iowa State University (ISU), is the principal investigator (PI) on a project titled “Advances in closure modeling for turbulent flows with finite-sized particles informed by massive simulations on heterogeneous architectures.” The National Science Foundation’s (NSF) Computation and Data-enabled Science and Engineering (CDS&E) program has provided more than a quarter of a million dollars to Iowa State University for this three-year study. The total award amount for the project to all three institutions is $678,526, of which $262,072 comes to ISU.

The research team will use highly accurate simulations of turbulent particle-laden flow developed previously by Subramaniam and his colleagues combined with a super-fast algorithm for turbulent flow developed by P.K. Yeung, a co-PI on the project and a professor of aerospace engineering at Georgia Tech University (GT). Yeung has performed the world’s largest turbulent flow simulation, but without particles.

The group with also utilize another super-fast algorithm for particles developed by Jesse Capecelatro, the project’s other co-PI and an assistant professor of mechanical engineering at the University of Michigan (UM), to perform first-of-its-kind simulations of the largest turbulent particle-laden turbulent flow with this level of accuracy and fidelity. This project builds upon past work Subramaniam has done with Capecelatro. The duo are currently involved with another NSF project examining heat transfer in particle-laden flows.

The research team will also utilize the NGA code developed by Capecelatro, which is capable of taking the information obtained by the simulations of the largest turbulent particle-laden turbulent flow performed with the ISU-GT-UM code and computing the flow inside a commercial reactor. Though Subramaniam acknowledges these particular simulations are not part of his current project, the research performed in this regard will­ open the door to future studies in this field.

As the PI on this project, Subramaniam is responsible for coordinating team meetings between the researchers at the three universities and also for keeping the project on track. Prior to COVID-19, the researchers had planned to collaborate in-person during annual conferences and through visits to partner institutions, however they’ve had to adapt their plan during the project’s first year. The group is hopeful that in-person interactions will be more feasible a year from now. Despite the changes to the original plan, Subramaniam said that inter-university projects like this have many benefits, particularly for graduate students involved.

For his contributions to the project, Subramaniam will bring in mechanical engineering concepts such as lift and drag, which are covered in his ME 335: Fluid Flow course. He will also utilize heat transfer from flow over a particle, as covered in his ME 436: Heat Transfer class. Lastly, he’ll bring in past flow collections of particles in what researchers call a particle-laden suspension from his ME 632: Multiphase Flow course.

“These fundamental concepts apply directly to this project, but we learn a lot of new things about the collective motion of these particles, how they cluster and how that affects the drag they experience and the heat transfer characteristics of the suspension,” he said.

One potential application from this project could be the ability to simulate commercial scale reactors with a level of accuracy and predictive capability that was previously unimaginable. This could build upon another project in which Subramaniam is collaborating with ME associate professors Alberto Passalacqua and Mark-Mba Wright and Anson Marston Distinguished Professor in Engineering Robert C. Brown, which applies computational tools for the simulation of entire fluidized bed reactors.

Subramaniam is now focused on assembling a team of student researchers for his part of the ISU-GT-UM collaboration.

“We’re excited to be working on this project. I am looking forward to recruiting some really motivated students who have serious computing skills to work on these advanced algorithms in high performance computing architectures,” Subramaniam said.