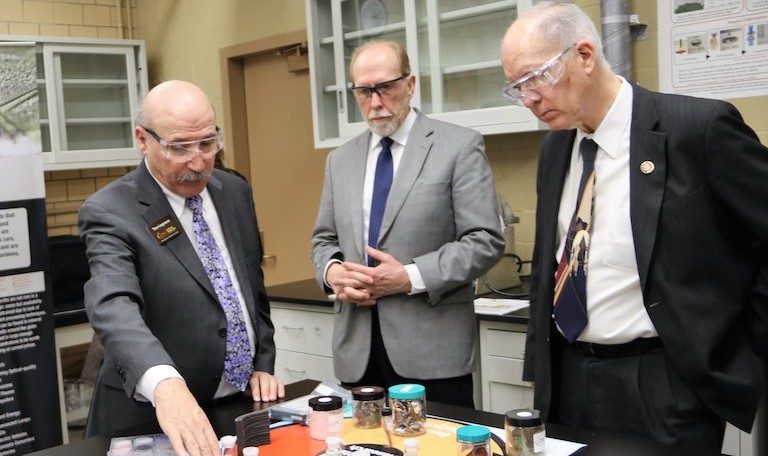 Dr. Thomas Lograsso has been named director of the U.S. Department of Energy’s Critical Materials Institute (CMI) at Ames Laboratory. He currently serves as the interim director, and his appointment to the permanent position will be effective immediately.

Dr. Lograsso has been with Ames Laboratory since 1988, and with the Critical Materials Institute since its inception in 2013.

At Ames Laboratory, Dr. Lograsso has served as Deputy Director since 2014. He has also served as Interim Director in 2013-2014 and as Division Director for Materials Sciences and Engineering (2008-2013). He maintains an active research project that develops synthesis protocols for new materials, including quasicrystals, ferromagnetic shape memory alloys, and those that may contain volatile reactive or toxic components, especially in single crystalline form. Often his pioneering synthesis efforts result in the first single crystals of these novel materials to be grown and studied for intrinsic behavior.

Dr. Lograsso holds two patents and is the author of more than 440 peer-reviewed articles. He is co-inventor of a rare-earth free substitute for the magnetostrictive alloy Terfenol-D (containing the critical elements Terbium and Dysprosium) used in high precision machining operations for small engine components and as an ultrasonic driver in petroleum exploration. This iron-based substitute is currently being evaluated for commercialization in energy harvesting applications.

Dr. Lograsso received his education in metallurgical engineering at Michigan Technological University, earning his Ph.D. in 1986. He did postdoctoral training working on the Rensselaer Polytechnic Institute team, developing the Isothermal Dendritic Growth Experiment (IDGE) that flew on the Space Shuttle in the late 1990s.

“Tom’s materials science accomplishments, as well as his able leadership at transitional points in the laboratory’s history, made him the obvious choice to lead the Critical Materials Institute,” said Ames Laboratory Director Adam Schwartz, “CMI plays a vital role in the Nation’s energy security, and we have great trust in his ability to steer the Department of Energy’s Innovation Hub through its next chapters.”

The Critical Materials Institute is a Department of Energy Innovation Hub led by the U.S. Department of Energy’s Ames Laboratory and supported by the Office of Energy Efficiency and Renewable Energy’s Advanced Manufacturing Office, which supports early-stage research to advance innovation in U.S. manufacturing and promote American economic growth and energy security. CMI seeks ways to eliminate and reduce reliance on foreign sources of rare-earth metals and other materials in support of President Trump’s Federal Strategy to Ensure Secure and Reliable Supplies of Critical Minerals.

DOE’s Office of Science is the single largest supporter of basic research in the physical sciences in the United States, and is working to address some of the most pressing challenges of our time.  For more information, please visit science.energy.gov.