The National Academy of Inventors is adding Iowa State University’s Balaji Narasimhan and Guru Rao to its roster of academy fellows.

The academy announced today it is recognizing Narasimhan – an Anson Marston Distinguished Professor in Engineering, the Vlasta Klima Balloun Faculty Chair and the director of Iowa State’s Nanovaccine Institute – and Rao – an associate vice president for research – for demonstrating “a highly prolific spirit of innovation in creating or facilitating outstanding inventions that have made a tangible impact on the quality of life, economic development, and welfare of society.”

The academy’s announcement specifically cited Narasimhan’s work in nanomedicines and biomedical engineering; Rao was cited for his work in biochemistry.

Narasimhan said his work is at the intersection of materials science, nanotechnology and medicine.

The latest projects in his lab include studies of a universal nanovaccine for flu, an immunotherapy treatment for pancreatic cancer, a new nanovaccine for respiratory syncytial virus (RSV), nanomedicine-based methods to overcome antimicrobial resistance by some pathogens and nanovaccines to treat older adults.

Common to all the studies is use of nanoparticles as a platform for delivering vaccines and other treatments. Narasimhan said nanoparticle-based therapies have the advantages of being needle-free, available in single doses and stable at room temperature.

While Narasimhan acknowledged it’s nice to be recognized for his nanovaccine work, he said the research projects are the combined efforts of students, postdoctoral research associates and scientific collaborators from universities and industries.

“Nothing I’ve done in any of these projects has been by myself,” Narasimhan said. “There’s a strong interdisciplinary culture that we have in our DNA here at Iowa State.” 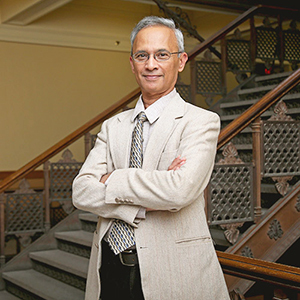 Rao’s work has been all about engineering proteins for the nutritional enhancement of crops such as corn and soybeans and designing proteins for resistance to insects and fungal pathogens.

Rao – the former chair of Iowa State’s Roy J. Carver Department of Biochemistry, Biophysics and Molecular Biology – has 28 patents from 1995 to 2017.

And so, this latest recognition is like a lifetime achievement award, Rao joked. It’s what happens when you’ve been discovering and inventing for so long. Rao was also elected a fellow of the American Association for the Advancement of Science in 2016 for his contributions to the field of crop improvement.

“It’s nice to be recognized,” he said. “And when the recognition is from your peers, that always feels good.”

The National Academy of Inventors will formally induct Narasimhan, Rao and the rest of this year’s fellows on April 10, 2020, in Phoenix during the academy’s annual meeting. The academy was founded in 2010 and now includes more than 4,000 members and fellows from more than 250 institutions around the world.

Narasimhan and Rao are Iowa State’s seventh and eighth fellows of the academy. The others are: