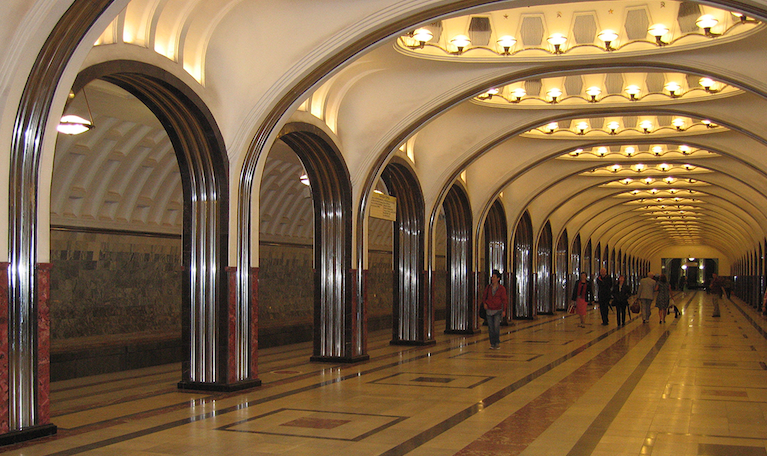 Iowa State University Professor of History James Andrews and Associate Professor of English Margaret LaWare edited and contributed to the collection of essays in “Art and the Global City: Public Space, Transformative Media and the Politics of Urban Rhetoric.” They emphasize impactful art is not confined to museums. It’s part of daily life.

Andrews’s essay connects the shifts in architecture and imagery in Moscow’s metro stations with the Soviet Union’s changes in leadership and ideology from 1930 to 1991. He points out the metro provides a unique underground haven for historical preservation as developers reconfigure the cityscape above.

LaWare’s piece also highlights how public art communicates certain values but focuses on two community-based, collaborative murals in Chicago. Both were created in the 1960s and 1970s to celebrate Black and Mexican American cultures and activism and were brought back to life in 2017.

With the Bolshevik regime’s push for hyper-industrialization and collectivization of agriculture in the late 1920s and early 1930s, Moscow’s population nearly doubled in just two decades.

Andrews explains the Soviet Union’s first metro system was designed to serve two purposes: move the masses underground to ease pressure on clogged streets; and create a visual and architectural showcase for socialism.

Scrolling through photos on a laptop, Andrews pauses on the image of the Mayakovskii Metro Station, one of the first Moscow metros and named after the futurist poet Vladimir Vladimirovich Mayakovskii. He points out the spacious halls and domes, sleek lined porticos, colored marble and cupolas above the platform, saying they invoke air flight and space travel. The aesthetic reflects the utopian and modernist ideals of the time.

“However, by the end of the decade, the metros are less futuristic and start to invoke themes more associated with industrial development and agriculture,” says Andrews. “Citizen heroes are beginning to become larger than life.” 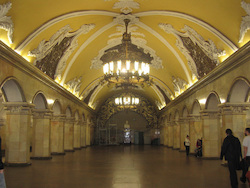 Komsomolskaia Station, which opened in Moscow in 1952. Photo courtesy of James Andrews.

Following World War II, the architecture of new metro stations shifts dramatically away from minimalism and toward more ornate, almost Baroque-like design elements. Andrews pulls up the image of the Komsomolskaia Station built in 1952. Its gold mosaics depict military parades and figures from Russian history. He explains Joseph Stalin was trying to connect the Communist Party’s leadership with national legends and heroes.

After Stalin’s death in 1953, the new head of the Communist Party, Nikita Khrushchev, emphasized utility over art. Metros on the outskirts of Moscow were built with prefabricated materials. They were simpler and narrower in design.

While Khrushchev was ousted from office in 1964, his utilitarian legacy carried on as the metro system continued to expand in the 1970s and 80s until Mikhail Gorbachev came into power in 1985. Once again, new stations were built thematically, involving artists to celebrate heroes.

Incorporating art and highlighting national narratives into new metros continued after the break-up of the USSR and rise of Vladimir Putin. Built in 2003, Park Victory Station depicts glorified battle scenes with Russia’s defeat of Napoleon in the War of 1812 and the USSR’s victory over Hitler in 1945.

“Millions of people ride the Moscow metro on a daily basis, and the architecture and iconography of the stations have a profound effect on people,” says Andrews. “People enjoy spending time in the stations.”

Andrews, who has lived and worked in Moscow, recalls stories of students using the underground spaces to study and people reading books on “clean and beautiful platforms” while they waited for friends.

He adds that the Metro, to some extent, serves as a unique time capsule. Like many cities, there’s tension between those who want to save historic buildings and those vying for new development.

“In a way, the Metro preserves the periods more than any place in Moscow because no developer is going to want to go underground.”

The Civil Rights and Chicano movements in the 1960s and 1970s influenced two community murals that LaWare highlights as “part of the layered understanding of Chicago.” She says recent efforts by neighborhoods, organizers and city officials have brought these histories “back to the surface, showing how past moments are relevant to the current moment.”

The Wall of Respect

In 1967, a collective of Black artists “initiated a world-wide community art movement” through the creation of a mural, the Wall of Respect, in a neighborhood on the South Side of Chicago. With portraits of Black “heroes and sheroes” like Malcom X, James Baldwin and Nina Simone, LaWare explains the mural addressed a lack of representation in the 1960s media and aimed to instill a sense of pride and possibility in the neighborhood.

A temporary exhibit in 2017 about the Wall of Respect in Chicago. Photo courtesy of Margaret LaWare.

“While the artists worked together on the concept, they maintained their individual styles. This, plus the mix of photographs and canvases they attached directly to the corner store’s wall, created a collage effect,” says LaWare, adding the jazz performances, poetry readings, protests and everyday interactions in front of the mural also created layers of meaning.

The Wall of Respect served as a community focal point and inspired over 1,500 murals painted in Black neighborhoods around the U.S.

But in 1972, less than five years after its conception, a fire destroyed the building and most of the mural.

To mark what would have been the Wall of Respect’s 50th anniversary, the city of Chicago worked with the Organization of Black American Culture to create a temporary exhibit in 2017. The displays, speakers and performances “elevated the Wall of Respect finally to its proper place as a foundational public artwork.”

Around the same time Black artists were creating the Wall of Respect, an area in Chicago’s Lower West Side was transforming from a Czech and Polish neighborhood to a Mexican American neighborhood. A new community center, Casa Aztlán, provided English and citizenship classes, health clinics, day care and space for meetings and events.

In 1975, local artists painted murals depicting the history of Mexico, including pre-Colombian artifacts and figures from the Mexican revolution, on the interior and exterior of a community center. Another local artist worked with the community a decade later to repaint the murals, adding lush, vibrant tropics with Aztec dragons and contemporary activists, including the American labor leader Cesar Chavez. 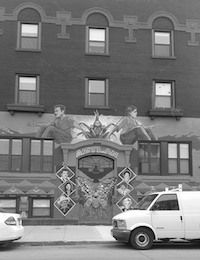 The front mural on the former Casa Aztlán building in Chicago, 2017. Photo courtesy of Margaret LaWare.

Around 2010, the working-class neighborhood started to shift again, this time into a more upscale community. Casa Aztlán, struggling with debt, closed a few years later. When a developer bought the building in 2017 with plans to turn it into luxury apartments, LaWare says the imminent destruction of the murals became a rallying point amid growing concerns over gentrification.

“The closing and redevelopment of Casa Aztlán felt like an erasure of an important piece of the neighborhood’s history,” says LaWare.

After an organized march and protest, the developer agreed to have one of the original artists repaint the façade after the renovation work. Artists and community members came together to decide who to “immortalize” on the wall. They picked local labor organizers and poets, activists, educators and Casa Aztlán’s former director.

LaWare says Casa Aztlán’s murals and the Wall of Respect both created visual spaces that have helped people feel connected to their community and re-imagine their place in Chicago. Even though repainting the converted Casa Aztlán building did not stop gentrification, the murals continue to serve as physical markers; they help people remember and understand the neighborhood’s past.

“Public art makes visible the cultural and historical textures of places that otherwise can easily get replaced by urban development,” says LaWare.