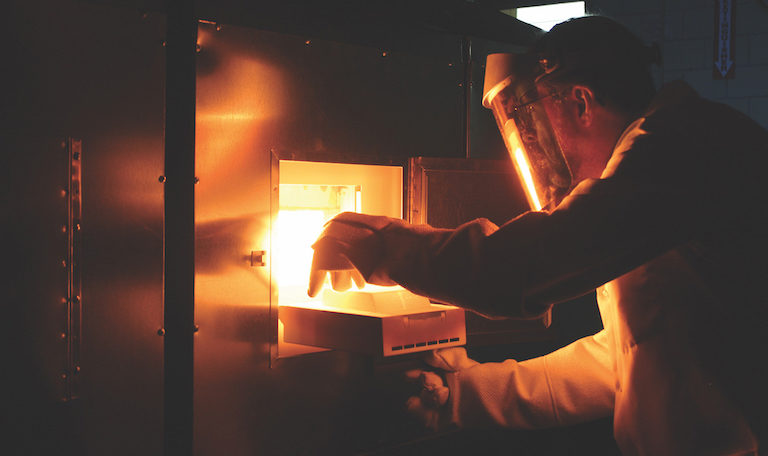 Paul Canfield removes a sample from a flux-growth furnace. Photo courtesy of the U.S. Department of Energy, Ames Laboratory
04.24.2020

Paul Canfield, who designs and discovers new materials and properties, has been elected to the American Academy of Arts and Sciences.

Canfield is a Distinguished Professor in Liberal Arts and Sciences and the Robert Allen Wright Professor of Physics and Astronomy at Iowa State University. He’s also a senior scientist at the U.S. Department of Energy’s Ames Laboratory.

Canfield, noting the academy includes Benjamin Franklin, Thomas Jefferson and other icons of American history and science, said “joining a group that has such origins is wonderful and delightful. There are so many esteemed colleagues, inspirations and role models in the academy, it’s quite an honor to be joining them.”

Canfield is part of a new class of more than 250 members elected to the academy this year. Canfield joins the physics section within the academy’s mathematical and physical sciences class. He’ll be formally recognized during ceremonies scheduled for October.

“The members of the class of 2020 have excelled in laboratories and lecture halls, they have amazed on concert stages and in surgical suites, and they have led in board rooms and courtrooms,” David W. Oxtoby, the academy’s president, said in a statement. “With today’s election announcement, these new members are united by a place in history and by an opportunity to shape the future through the academy’s work to advance the public good.”

In addition to noting his scientific work, leaders of Iowa State and the Ames Laboratory praised Canfield for his innovation and enthusiasm:

Canfield says condensed matter physics is responsible for “much of what is around you today.”

Your cell phone, for example, includes materials related to semiconductors, optics and high-speed electronics, he said. And it was physicists who went about “discovering and understanding all the materials that make these technologies possible.”

Canfield said the unique university-national laboratory partnership at Iowa State and the Ames Laboratory deserves some of the credit for his research group’s discoveries over nearly three decades of work.

“It’s the marvelous, almost magical, hybridization of these two institutions that makes the type of work I do possible,” he said. “We’ve been able to take advantage of a co-located land-grant university and a mid-sized national laboratory to continue their joint tradition for basic research into the physics, chemistry and metallurgy of novel materials.”