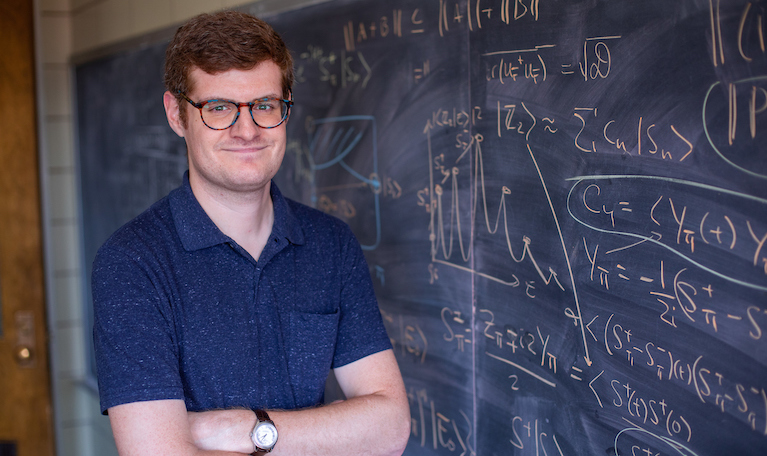 Thomas Iadecola studies how states of matter emerge from collections of atoms and subatomic particles and recently contributed theoretical work and data analysis to a paper published by the journal Nature. Photo by Christopher Gannon.
08.1.2022

Then he offered explanations of nonequilibrium systems, time crystals, 2T periodicity and the 2016 Nobel Prize in Physics.

Iadecola’s corner of quantum condensed matter physics – the study of how states of matter emerge from collections of atoms and subatomic particles – can be counterintuitive and needs an explanation at most every turn and term.

The bottom line, as explained by the Royal Swedish Academy of Sciences in announcing that 2016 physics prize to David Thouless, Duncan Haldane and Michael Kosterlitz, is that researchers are revealing more and more of the secrets of exotic matter, “an unknown world where matter can assume strange states.”

The new paper published in the journal Nature and co-authored by Iadecola, an Iowa State University assistant professor of physics and astronomy and an Ames National Laboratory scientist, describes simulations using quantum computing that enabled observation of a distinctive state of matter taken out of its normal equilibrium.

The paper’s corresponding author is Dong-Ling Deng of Tsinghua University in Beijing, China. Deng and Iadecola worked together in 2017 and ‘18 as postdoctoral researchers at the University of Maryland.

“Our work paves the way to exploring novel non-equilibrium phases of matter,” the authors wrote in a summary of their paper.

For you and me, those novel states of matter could one day provide unique and useful properties for new technologies. Possible applications in quantum information processing include precision measurement science and information storage.

For this project, Iadecola was a supporting scientist who contributed theoretical work and data analysis. For example, “In a collaborative project like this, my role is to help define the questions the experimentalists need to address,” he said.

The major question they answered in this paper is how a quantum computing platform can be used to study and understand exotic states of matter.

“This paper demonstrates the researchers have a very nice digital quantum simulation platform,” Iadecola said. “This platform can also be applied to other interesting problems in quantum many-body physics.”

The project dovetails with work Iadecola will start this summer as part of a five-year, $470,000 National Science Foundation CAREER grant. The foundation calls the awards its most prestigious for early career faculty.

The grant will support theoretical work in many-particle quantum systems, including studying how delicate quantum states can be preserved. That preservation would allow the states to be used for quantum computation, a new technology that uses quantum dynamics to process and store information.

The grant will also help Iadecola develop an interdisciplinary curriculum in quantum computing at Iowa State to help “grow the quantum talent pipeline.”

While the project is all about theory and education, a summary says it will be approached “with a view towards emerging quantum technologies.”

“We’re thinking about new phenomena,” Iadecola said. “Realizing these phenomena on present-day quantum hardware could set the stage for moving us toward these applications in quantum information processing.”