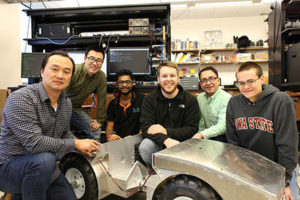 By Derek Clayton, Office of the Vice President for Research

For many farmers around the world, a bad harvest threatens the health of their families and communities. And the threat is growing as the world experiences unprecedented variation of weather patterns.

What do you need to apply data-driven science to crop science? A lot of data about how crop plants grow. But manually taking plant measurements is slow and difficult. So Iowa State researchers are developing PhenoNet, an integrated network of autonomous plant-measuring robots for field-based studies of genotype and environment (GxE) interactions. The $1.2 million project is funded by the National Science Foundation Major Research Instrumentation program and cost-share support from Iowa State.

“The goal of the PhenoNet project is to develop a network of robots that will capture data in crop fields and channel the data to a central processing unit where it can be analyzed,” said Lie Tang, an associate professor and a robot specialist in the department of agricultural and biosystems engineering.

These autonomous robots, called PhenoBots, measure vast numbers of plants as they grow. The robots are equipped with uniquely customized and situated sensors to quickly scan rows of plants in the field to characterize their structural and morphological traits.

Information such as stalk size, plant height, and leaf angle for each genetic line in an entire field is generated and transmitted to a data warehouse, where it is stored for analysis. Made up of all the PhenoBots and the data system that connects them, PhenoNet represents a new way to collect the massive amounts of data on plants that we’ll need to identify breeding improvements.

“Without data, you don’t have science, and without a sufficient amount of quality data, science can be crippled,” Tang said.

With all the data collected by the PhenoNet, scientists have an eye on addressing the bigger picture, feeding a growing world population. But, the first step is looking at the information gathered by the PhenoNet and relating it to genes in plants and the environment in which plants grow.

“Some people remain healthy despite having unhealthy lifestyles, whereas others develop health problems. People react differently to the same environment. The same phenomena occurs among plants. Some plants can tolerate stress environments better than others. These differences are controlled at least in part by plant genes” said Patrick Schnable, a Distinguished Professor of agronomy, the Iowa Corn Promotion Board Endowed Chair of Genetics, and director of the Iowa State’s Plant Sciences Institute.

With the PhenoNet collecting massive amounts of data for researchers to sift through, scientists can start picking up on patterns relating genes to plant phenotypes.

In other words, they can see how well a plant grows in a particular environment and look at the genes present within it. This means scientists can draw relationships between phenotypes and genotypes grown in multiple environments, making it possible to determine which genes allow plants to grow better in specific environments.

The project has its fair share of challenges, though. There is a limited space between the crops, restricting the PhenoBots’ size and maneuverability.

Finding and orienting sensors that can work within those small spaces while covering the entire growth span of plants, particularly those that grow tall like maize, is difficult. That’s the task Tang is focusing on now.

“Plants are grown in a limited space and one of our greatest challenges has been developing sensors and their mobile carriers that can work within that space,” said Tang. “Both the platform and sensors are critical to fulfilling a phenotyping robot’s mission, and both call for creative engineering solutions since there is no off-the-shelf product available for either part.”

Despite all these hurdles, Tang and his collaborators are passionate about developing PhenoBots and PhenoNet. In the future, the world may very well see these autonomous machinations helping stabilize and improve crop yields. And PhenoNet could do even more: it could be the very first step towards developing crop seeds that flourish in stressful environments, such as those experiencing droughts.

“We need high yields across environments to solve the problem of feeding our growing world population,” said Schnable.