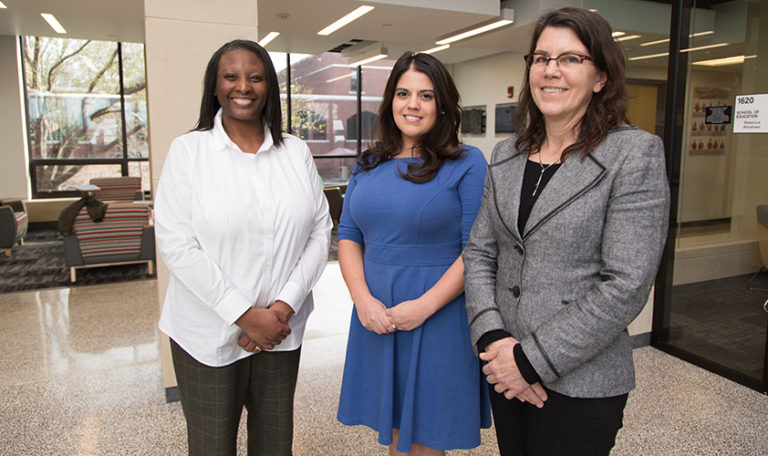 By College of Human Sciences

Human scientists at Iowa State University are using research to show that students learn best when teachers interact with them in ways that recognize their cultural and social identities as positive assets in the classroom.

People commonly think that teachers in science, technology, engineering, and math (STEM) focus on facts and objective information. But research by School of Education faculty shows that connecting students’ cultural and social identities to these fields can enhance learning and identity formation for those underrepresented in science.

“There’s a lot of human science in thinking about how we teach, how we learn to teach, and how we can undo some of the problematic patterns that seem to be so widespread in schools,” said Gale Seiler, an associate professor in the School of Education.

“Traditionally, classrooms have distinct borders — this is the way we act in class, you can act that way outside the class, but not in here,” Seiler said. “But if we want students to bring in who they are with their knowledge and experiences, then we have to think about those borders as being more porous and teachers as having to change their practices.”

Christa Jackson, an assistant professor in the School of Education, researches equity in mathematics education, especially among African-American students. Her research shows how teachers’ perceptions and biases affect how they treat students.

Jackson’s research interest began with her own love for mathematics and a realization that most of her peers did not have a positive mathematics experience.

Jackson gave an example of how black students are viewed differently than white students.

She said when future teachers read a case that involves a white student who is advanced in mathematics, but has some behavior issues, they perceive that the student should be moved to a higher-level class. But when the student is replaced by a black student in the same case, the future teachers focus on the student’s disruptive behavior and lack of following directions.

“Typically, the students who are struggling in mathematics are struggling because they are being taught from a Eurocentric standpoint,” Jackson said. “With that Eurocentric standpoint, we have the role model of ‘sit in your seats, don’t get up, no talking,’ etc. But, our students of color are not brought up in that Eurocentric paradigm, so we need to change our teaching practices to make sure we’re meeting the needs of all the students in our classrooms.”

Jackson hopes to expose these biases so that teachers don’t fall into inequitable teaching patterns without realizing it. If the teachers are aware of their biases they can begin to combat them and focus on teaching based on each student as an individual.

“You have to take the time to get to know the students and their families and their backgrounds and bring students’ assets into the classroom,” Jackson said.

Rodriguez has always loved science but as a woman and Latina, she did not see her identity in a STEM field when choosing her career path.

Her continued interest in these fields, however, led her to use scientific research to understand how Latina women shape their identities in STEM-related careers such as scientists, researchers, and engineers. Rodriguez hopes to help her community bring together their cultural identity with their STEM identity.

“I want to see us take a more intersectional approach to STEM identity development,” Rodriguez said. “I don’t think we are thinking about STEM in terms of the whole student necessarily.”

Intersectionality is about acknowledging that people are multidimensional. Rodriguez’ research found that the way a Latina thought of herself as a STEM person was always seen through the lens of being a woman, a person of color, or a Latina.

Because of this, a Latina will often carry stereotype threat — a fear of her actions reflecting poorly on their entire community. Often she also carries the weight of being the only Latina she knows in STEM.

“When I looked around the room in my classes or meetings, there were very few people that looked like me,” said Monica Cisneros, a post-baccalaureate student at Harvard and participant in Rodriguez’s study. “As a Latina — which is a double minority in STEM fields — I have very different perspectives and experiences in everyday work life than my colleagues and my classmates.”

Rodriguez suggests that thinking intersectionally will help students use their unique perspectives and experiences in a positive way in their field. Many students want to give back to their communities through their disciplines.

“By approaching it in that intersectional nature, where you can come from other areas of a student’s life, you’re really able to allow the students to work with what they have and to work with the experiences they’ve had — to make their own STEM experience and redefine what we think of as a STEM person,” Rodriguez said.

Like Jackson and Rodriguez, Seiler is also interested in why students of color are underrepresented in STEM and how that trend can be changed. She investigates how to prepare teachers who can better teach students who are commonly marginalized in science, and also understand the systems that reproduce inequity in science and in schools.

“I think a lot of the interactions that happen in classrooms, especially science classrooms, have a big impact on students,” Seiler said. “Are students able to see themselves in science or feel like science is a place that they can contribute? Are their knowledge and experiences validated in science classrooms? I think that often doesn’t happen, particularly for African-American and other students of color.”

Seiler’s research shows that when these students are in a classroom that values their ideas and where they can contribute using their own ways of speaking and making sense of things, they become more highly engaged in learning.

These students ask questions that relate science to their own lives. But due to cultural bias and unfamiliarity, teachers often don’t understand, notice, or accept their contributions. Seiler wants to help teachers move past their implicit biases and be able to recognize how students’ cultural experiences and knowledge can be resources for learning.

“Science, more than any other subject, can excite students who are otherwise disengaged in school and considered at risk,” she said.

Seiler has heard students talk about sound, wavelength, and frequency in relation to their own lives — tuning drums by tightening the head of the drum, or knowing if a hair clipper blade is too tight or not tight enough based on its sound.

“They are connecting their lives with science all the time,” she said. “They may not be realizing they’re doing it, but they are, although teachers often don’t recognize it.”

“I’ve seen classes where students are actually trying to make those connections but get reprimanded,” she said. “The teacher responds in ways that show the teacher’s not really hearing what’s being said.”

Seiler added that these kinds of interactions show assumptions that are made about students of color and represent patterns of discrimination.

Seiler works with future teachers to help them break these patterns and recognize the role they can play in stopping cycles of injustice. She wants Iowa teachers to be prepared to teach in more diverse classrooms than they attended, and to be agents of social change preparing the next generation to also stop patterns of discrimination.

Research by faculty in the School of Education shows that recognizing students’ cultural identities as assets in science, technology, engineering, and math (STEM) fields enhances learning.

“We need to change our teaching practices to make sure we’re meeting the needs of all the students in our classrooms.” Christa Jackson