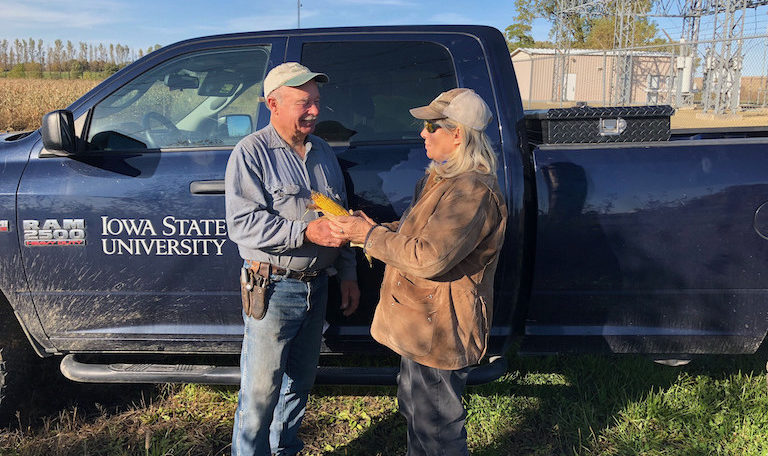 Iowa State University scientists are leading an effort to improve efficiency and genetics in organic corn production, a fast-growing sector of the agricultural world since the beginning of 2020.

Thomas Lübberstedt, a professor of agronomy at Iowa State, leads a research team aiming to develop new lines of corn that take advantage of recent advancements in crop genetics that also can be grown according to organic standards. The research team recently received a $1.4 million grant from the U.S. Department of Agriculture’s National Institute of Food and Agriculture to apply genetic tools to the development of organic sweet corn and varieties of corn for specialty uses, such as for popcorn and tortillas.

Lübberstedt said the researchers will build on previous work to identify genes controlling traits valued by organic producers, such as pest tolerance and kernel quality.

“In this new project, we say that there’s quite a few genes that are already known in maize that would add value to rapidly generate new sweet corn or specialty corn varieties if you could handle them efficiently using the tools and methods allowed in the organic production context,” he said.

To be certified organic, producers cannot use any synthetic chemicals or inputs in growing their crop. That means many of the fertilizers, pesticides and herbicides used in conventional corn production are off limits when growing organic corn. Instead, organic farmers rely on manure or compost to fertilize their crops. They also prize varieties that are more tolerant of pests, since they can’t treat their fields with synthetic pesticides.

Most seeds bred for corn production are suited to conventional agricultural systems, not organic. The researchers will create proof-of-concept corn varieties better suited for organic production. The researchers will utilize an organic-compatible version of doubled haploid technology, which allows for the development of usable inbred lines much faster than conventional breeding. Organic farmers who have agreed to evaluate the hybrids will supply feedback to the researchers on which varieties appear most promising.

Kathleen Delate, a research team member and professor of horticulture and agronomy, said the demand for organic corn has grown rapidly in recent years as consumers gain greater awareness of the environmental impacts of food production. Sales of organic food in the United States climbed over 12% last year, jumping from roughly $55 billion in 2019 to around $62 billion in 2020. Delate said there are around 132,000 acres devoted to organic production in Iowa, roughly evenly split between corn and soybeans, she said.

Delate said organic corn is a particularly important product because organic livestock, poultry and egg production depend on organic corn for feed.

“Even if you’re not consuming organic corn directly, it has a big impact on the market,” she said.

The research team also includes Paul Scott, a research geneticist for the U.S. Department of Agriculture’s Agricultural Research Service, who will focus on genetic traits such as nutritional value and genetic purity. Scott also studies specialty corn varieties, such as white and blue corn, often used to make tortilla chips. Bill Tracy, a professor of agronomy at the University of Wisconsin-Madison, will focus on improving sweet corn traits.