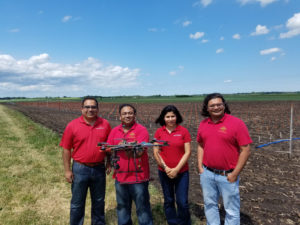 A plant pathologist spots disease in a soybean plot – but it could be too late.

Researchers at Iowa State University are trying to find a way to detect crop plant diseases earlier. They’re building a data analytics and machine learning framework that will allow farmers to act quickly to mitigate the disease’s spread. The data will come from ground robots, unmanned aerial systems and satellites.

These researchers landed external funding in March through the National Science Foundation’s Cyber-Physical Systems program, with support from U.S. Department of Agriculture’s National Institute of Food and Agriculture (NIFA).

“With federal agency awards, if you just say, ‘We think that it should work’ – that’s not going to cut it,” Sarkar said. “That’s why the PIRI program was so important. It helped us build a tight collaboration and preliminary data to give them a credible story.”

Setting the stage for data collection

“It’s a slow process, and even an experienced crop scout or pathologist can’t thoroughly scout acres of a field in a day,” Arti Singh said. “So that’s where the need arises.”

Another challenge is in the variability of data collection.

“One person is fresh in the morning, and you evaluate the plants in the field more accurately. But late in the afternoon your ability to observe symptoms in the field decreases significantly,” Sarkar said. “In addition, we have a problem with inter-rater variability, for example, when you have five pathologists in the same field – they may come up with different observations.”

That’s where smart tools come into play: ground-based robotics, aerial vehicles such as UASs and fixed-wing aircrafts, and satellite imagery to detect signatures of disease.

Satellites will collect low-resolution imagery covering acres of land, and information from those images can be used to tell the UASs to zoom in on one area in finer resolution, and finally local sensors will collect images of a plant in that field. The team is collaborating with the NASA Jet Propulsion Laboratory to collect and understand satellite imagery.

The framework this NIFA team is developing will pull from these layers of data – plant-level digital images, multispectral and hyperspectral images, weather conditions, soil conditions, and computational model predictions – to identify and suggest disease mitigation strategies.

“By using larger images to detect disease symptoms, you are identifying the location of diseases and controlling them in a very efficient way,” Ganapathysubramanian said.

The ground-based platforms are being developed through a separate project where the team is collaborating with roboticist and assistant professor of mechanical engineering Sourabh Bhattacharya, via a grant awarded in December from USDA-NSF’s National Robotics Initiative program.

The idea isn’t to remove humans from the equation, however.

“The approach actually improves human capability and helps the experts make more efficient and quick decisions, and eventually improve the productivity and profitability of the entire farm,” he said.

Last year, farmers learned how the project will directly impact them – and gave the researchers feedback on what will and won’t work.

“This summer there will be a lot of activity because we’ll get the opportunity to do field experiments and start developing the data analytics framework,” Sarkar said. “We really hope that we’ll be able to demonstrate some tools that we can off-ramp and actually market in the near future.”

What Sarkar’s NIFA team needs to figure out is how to make sense of the massive amount of data the system will collect.

“How do you combine all these data sources and make meaningful decisions? That’s the core of this problem,” Ganapathysubramanian said.

The PIRI grant set the stage to eventually apply for the funding the team received this spring. About 30 faculty came together starting in 2015 to brainstorm about big data and agriculture.

This funding is also helping plant scientists and engineers overcome the barriers of collaborations in diverse disciplines and tackle current and future problems in food and environment.

“With advanced data analytics, I’m learning … a new language,” Danny Singh said. “The PIRI collaboration was essential for us to get to a stage where we could have more meaningful discussions in order to propose a big picture agriculture-related problem and solutions.”

Arti Singh pointed out that the project will have an impact beyond the fields.

“It is catering to the needs of farmers, researchers and the scientific community,” she said.

This tool – a data analysis framework that pulls together information on the crops and what plant diseases may be present – would be a huge benefit to farmers, Arti Singh said.

“The end product we are going to generate from this project is going to apply right in the farmers’ fields,” Arti Singh said. “This is what I think is the most beautiful part.”