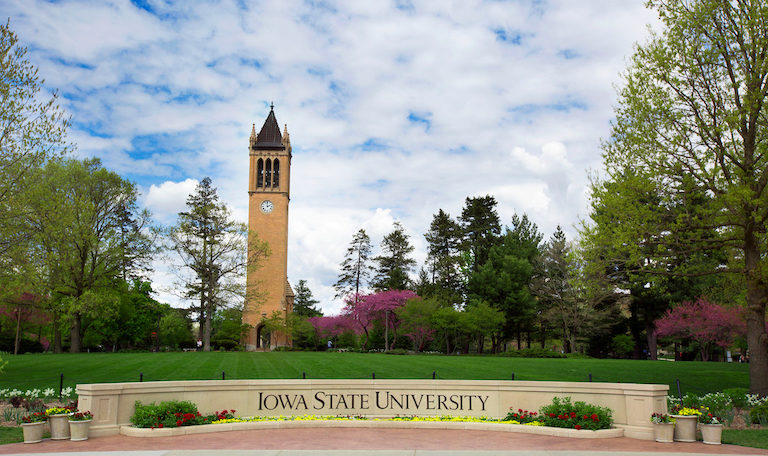 The 34th annual National Conference on Undergraduate Research takes place online April 12-14. About 4,000 undergraduate students from across the U.S. present their research at this annual conference, the largest undergraduate research conference in the country. This year, that includes 60 ISU students representing 29 different majors. Photo courtesy of Christopher Gannon
11.24.2020

The American Association for the Advancement of Science is honoring six Iowa State University researchers for work in engineering, math and biological sciences.

The six Iowa State researchers have been named to this year’s class of 489 AAAS Fellows “because of their scientifically or socially distinguished efforts to advance science or its applications,” the association announced today.

The six Iowa State researchers and their award citations are:

Kristen Constant, Iowa State’s vice president and chief information officer, a Morrill Professor, the Wilkinson Professor of Interdisciplinary Engineering and former chair of materials science and engineering, “For distinguished contributions to the design and fabrication of photonic structures and her influential role in materials engineering education and broadening participation in STEM disciplines.” Constant has transitioned from photonics research to administrative duties, but is still working to broaden participation in science, technology, engineering and math programs. Her recent work focuses on leveraging national accreditation practices to promote recruitment, retention and advancement of those underrepresented in STEM fields.

Leslie Hogben, an associate dean in the College of Liberal Arts and Sciences and professor of mathematics, “For distinguished contributions to the field of linear algebra and mentoring the next generation of mathematicians.” Hogben’s current research involves connections between linear algebra, graph theory and their applications. Linear algebra studies matrices, or arrays of numbers, while graphs model objects, relationships between them and networks. Matrices and graphs can give information about each other and the interplay between them provides information about a network being modeled.

Basil J. Nikolau, the Frances M. Craig Professor of biochemistry, biophysics and molecular biology, director of the Center for Metabolic Biology, director of the W.M. Keck Metabolomics Research Laboratory and former deputy director of the Engineering Research Center for Biorenewable Chemicals, “For distinguished contributions to the field of biochemistry, particularly for the characterization of novel metabolic processes.” Nikolau’s research focusses on integrating biochemical and genetic strategies to understand the metabolic processes that enable biological systems to generate diverse chemistries. He’s currently on leave from Iowa State, serving as the division director of the Division of Molecular and Cellular Biology in the Biological Sciences Directorate of the National Science Foundation (NSF).

Hridesh Rajan, the Kingland Professor of Data Analytics or Cognitive Machine Learning and chair of computer science, “For distinguished contributions to data driven science, particularly to modularity and modular reasoning in computer software and the development of the Boa language and infrastructure.” Rajan’s recent research and educational activities are aimed at decreasing entry barriers to data-driven sciences. He leads the NSF-supported Dependable Data Driven Discovery Institute at Iowa State and is the founding general co-chair of the Midwest Big Data Summer School.

James Roth, a Clarence Hartley Covault Distinguished Professor in Veterinary Medicine, the Iowa State University President’s Chair in Veterinary Microbiology and Preventive Medicine, director of the Center for Food Security and Public Health and executive director of the Institute for International Cooperation in Animal Biologics, “For distinguished contributions to the field of immunology, particularly for control of infectious diseases in food producing animals.” Roth studies emerging and zoonotic diseases of animals, including vaccine development and delivery, surveillance and biosecurity. He has pioneered educational courses on emerging and zoonotic animal diseases and disease control. He has also influenced government policy toward reducing the need to destroy infected herds or flocks while enhancing continuity of food production, processing and distribution.

Kan Wang, the Global Professor in Biotechnology in the department of agronomy and co-director of the Crop Bioengineering Center, “For advances in genetic engineering in plants using Agrobacterium tumefaciens.” Wang’s research explores novel technologies for crop genetic transformation and genome editing. She also investigates genes involved in crop species evolution, and studies Agrobacterium biology, especially the genes and other genetic elements involved in Agrobacterium-mediated DNA delivery into plant cells.

This year’s class of AAAS Fellows will be announced in this week’s issue of the journal Science. A virtual induction ceremony for the new fellows will be Feb. 13, 2021.

AAAS is the world’s largest general scientific society and publisher of the journal Science. The nonprofit is open to all, has a mission to “advance science and serve society,” and includes more than 250 affiliated societies and academies of science.