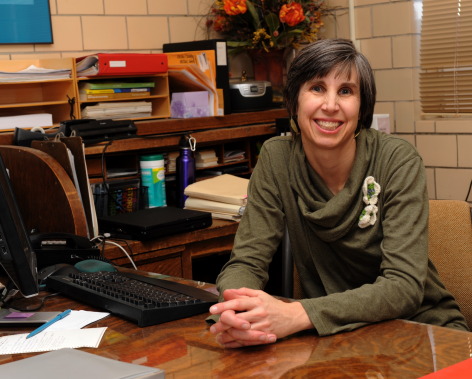 Gwyn Beattie is helping to launch an effort that stresses the web of interactions among the various components of an agricultural ecosystem. Photo by Robert Elbert.
03.4.2016

Studying interconnected communities of plants, microbes and other organisms in agriculture can unlock benefits for producers, consumers

Gwyn Beattie is helping to launch an effort that stresses the web of interactions among the various components of an agricultural ecosystem. Photo by Robert Elbert.

AMES, Iowa – On a farm, everything shares a connection.

The environment affects the soil, which affects the microbes and insects that live there, which affect the crops and livestock. All those components interact with each other in complex ways science is just beginning to tease apart, said Gwyn Beattie, a professor of plant pathology and microbiology.

“There are communities of microbes in the insects on the plants, and they can all interact with one another in various ways,” Beattie said.

And understanding those networks of interactions can unlock a vast range of benefits for producers and consumers the world over, she said. Everything from better yields to stronger resilience to environmental stress could arise from farm practices that embrace this intricate web of relationships.

But it’ll require a shift in how humans approach agriculture, Beattie said. Rather than focusing on the many individual components of a cropping system, she’s pushing for an emphasis on phytobiomes, or the collective interactions among plants, the environment and their associated communities of organisms.

Beattie helped launch the Phytobiomes Roadmap, an effort initiated by the American Phytopathological Society and supported by over 20 scientific societies, companies, institutes and government agencies. The roadmap aims to enhance global sustainable food, feed and fiber production to meet the doubling of global demand by 2050. The roadmap calls for greater use of private–public partnerships and coordination in research to increase global food production. Beattie recently traveled to Washington, D.C., to discuss the roadmap with various federal agencies and congressional staff.

“This is a plan to transition agriculture from a focus on individual components to looking at it as a system in which the components influence each other,” Beattie said.

The technology to untangle the countless ways various agricultural components work together didn’t exist until fairly recently, she said. But now scientists can identify and sequence the microbes in a soil sample, and farmers can utilize precision technology that allows them to track, store and use production data like never before.

“Now we can collect detailed data on crops, microbes, insects, weather and soils,” she said. We can integrate these data in models and start to fill in some of the foundational information that will make this approach work.”

Beattie said phytobiomes have the potential to help large farms in Iowa and small farms in developing countries alike because of their emphasis on each individual ecosystem. As knowledge of phytobiomes grows, farmers can tailor their practices to get the most out of those relationships.

For instance, it may be possible to breed crops with genes intended to favor microbes that improve yields or stress tolerance, she said.

“As our understanding of the phytobiome improves, the management practices will improve too,” she said.

A deeper understanding of phytobiomes, or the networks of interactions among the various components of an ecosystem, can unlock a vast range of benefits for farmers and consumers the world over. An Iowa State University researcher has helped to launch a new effort to emphasize phytobiomes in agriculture.

“This is a plan to transition agriculture from a focus on individual components to looking at it as a system in which the components influence each other.”