The CEAH fall reception is back and better than ever

By Paula Van Brocklin, Office of the Vice President for Research

Approximately 50 arts, humanities and social sciences faculty members and university administrators attended the Center for Excellence in the Arts and Humanities (CEAH) fall “Welcome Back” reception, held the evening of Oct. 4 in Beardshear Hall’s first floor atrium. The event, pronounced a rousing success by those who attended, had been held in previous years but took a hiatus of late. CEAH director, Carlton Basmajian, intends to make it an annual tradition in the future.

“We brought it back this year, and we hope to have something every fall going forward,” he said. “I’d like to see it connected to an autumn CEAH lecture in the future, if funding permits.”

In addition to tasty appetizers and beverages, the event showcased three faculty members who have received grants from CEAH to further their scholarly and research pursuits. Following is a description of the awards they received and how those grants helped make their careers flourish. 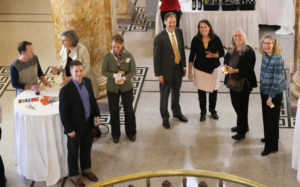 Padgett-Walsh has received multiple CEAH Research Grants (2010, 2013 and 2016) for between $5,000 and $6,000. She also was awarded a $6,000 CEAH Symposium Grant in 2016. Looking back, she said, these grants allowed her to conduct research, teach and engage with the community in ways she hadn’t thought were possible. The Research Grant, for example, helped Padgett-Walsh develop new projects and enticed her to take new risks.

“CEAH allowed me to take a risk by supporting a new avenue of research,” she said. “As such, it was invaluable to me as a junior faculty member.”

The Symposium Grant allowed Padgett-Walsh to expand her research by funding an academic conference. In turn, that conference yielded more publishing opportunities, a joint application for a National Endowment for the Humanities grant, national speaking engagements, and new teaching and outreach opportunities.

“Looking back, I see that little grants can have a massive impact on a career,” she said. “They let me take the risk of pursuing new avenues of research and using that research to engage with students and the community.”

Holland received a $6,000 CEAH Research Grant in 2016, which he used to fund the creation of 15 mixed media artworks that reflected elements of his daily life. Once completed, the artwork was showcased in multiple solo and group exhibitions, offering him heightened visibility as an artist and a competitive edge in receiving a prestigious fellowship from the Iowa Arts Council.

Holland’s artwork combines multiple digital drawings printed on clear sheets of plastic, which he stacks together to create a 2.5-dimensional image. The unusual art form prompted several invitations to Iowa art exhibitions within a short six-month period. Holland’s CEAH grant allowed him to fund and finish the artwork for all the shows.

“I did not have the funds to make enough artwork for all of the exhibits until I received help from CEAH,” Holland said. “CEAH funding came at a critical moment in my career as I was able to fulfill my commitments and present new and exciting artworks to the people of our state.”

Sivils received a $5,000 CEAH Fellowship for Scholarship and Creative Activity in 2009, a $10,000 Inaugural CEAH Fellow in the Arts and Humanities in 2015, and a $6,000 CEAH Research Grant in 2017. He credits CEAH funding for significantly enhancing his ability to conduct high-level humanities research.

“These grants have allowed me to work at major scholarly archives, to interact with leading scholars from other institutions, and to generate articles and books that make a positive impact in the scholarly world,” Sivils said. “At the same time, my CEAH-funded scholarship has made me a more knowledgeable and transformative teacher.”

Basmajian is pleased with the positive response to this year’s fall event, and hopes it’s a catalyst for a renewed appreciation of the arts and humanities across campus.

“We plan to continue doing this and hope that we can encourage more folks to attend and participate,” he said. “One goal of CEAH, among many, is to enhance the arts and humanities ecosystem on campus. We hope events like this can help.”