Two Iowa State University faculty have won highly-competitive fellowships from the National Endowment for the Humanities (NEH). These awards will support research projects for April Eisman, associate professor of art history in the Department of Art and Visual Culture, and Grant Arndt, associate professor of anthropology and American Indian studies in the Department of World Languages and Cultures.

“NEH fellowships are extremely prestigious awards, and we are proud that Iowa State is home to exceptional arts and humanities faculty like April Eisman and Grant Arndt,” said Iowa State’s Vice President for Research Sarah Nusser. “Their research on gender and ethnicity in historical contexts helps shape our understanding of ourselves and our society, and these awards continue a strong record of NEH funding for Iowa State humanities faculty in recent years.” 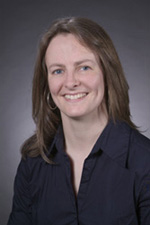 Eisman’s book project focuses on one of former East Germany’s most successful and outspoken contemporary artists, Angela Hampel. Part of the last generation of artists to come of age in East Germany, Hampel made frequent speeches demanding greater inclusion of women in the art world, while her punk-inspired, Neo-expressionist paintings of strong women from mythology and the Bible appeared in major exhibitions on both sides of the Berlin Wall. Eisman plans to use Hampel’s experience to examine gender politics in the east and women’s conditions in the west.

More broadly, Eisman’s research explores contemporary art and theory with an emphasis on East German art and its reception. Recent publications include, “East German Art and the Permeability of the Berlin Wall,” in German Studies Review and “Painting the East German Experience: Neo Rauch in the Late 1990s,” in Oxford Art Journal. Eisman has been the recipient of a number of national fellowships, including from the American Association of University Women, the Berlin Program for Advanced German and European Studies, the German Academic Exchange Service (DAAD), the Andrew Mellon Foundation, and the U.S. Department of Education. Co-founder of the Transatlantic Institute for East German Art, she earned a master’s degree in art history from the Courtauld Institute of Art in London and a Ph.D. in art history from the University of Pittsburgh.

Arndt’s book project examines the weekly “Indian News” columns written by four members of the Ho-Chunk Nation in Wisconsin and published in local, white-run newspapers in nearby towns. These columns became popular with non-Indian readers while also giving voice to Ho-Chunk frustrations over the discrimination and poverty they faced. Arndt will examine over 1,300 articles written in the 1930s and 1940s, exploring how these authors addressed some of the most important years in American Indian history.

Arndt published his first book, Ho-Chunk Powwows and the Politics of Tradition in 2016. Other recent publications include articles on the politics of perception in American Ethnologist (2016); on Indigenous media activism in Comparative Studies in Society and History (2015), Settler Colonialism Studies (2013), and American Ethnologist (2010); and on Indigenous autobiography in Ethnohistory (2012). He holds a master’s degree and a Ph.D. in anthropology from the University of Chicago.