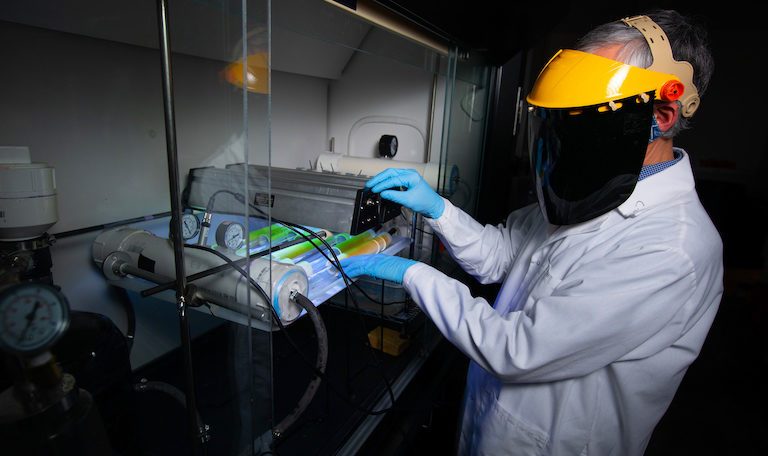 Jacek Koziel adjusts infrared lamps and sensors in a Sukup Hall laboratory. Experiments on infrared light shows that it’s capable of mitigating the spread of the virus that causes porcine reproductive and respiratory syndrome. Photo by Christopher Gannon
02.24.2021

Let there be (ultraviolet) light.

That’s the indication given by research conducted at Iowa State University regarding the use of ultraviolet light as a means of stopping the transmission of the virus that causes porcine reproductive and respiratory syndrome (PRRS), a costly swine disease that can spread through the air. Laboratory experiments showed that the radiation caused by some kinds of UV light kills the viral particles contained in aerosolized droplets, and the researchers hope to scale up their tests to show how their approach could work on a farm.

PRRS is an infectious swine disease that cost pork producers around $580 million in 2016. The virus spreads either by direct contact between pigs or by viral droplets carried in the air. These droplets can remain in the air for days and can travel for miles on air currents, making it a difficult virus to contain. A sow infected with PRRS is less likely to carry offspring to term, and young pigs affected by the disease suffer respiratory distress that slows their growth and makes them more susceptible to other diseases.

Some pork producers install costly air filtration systems in their barns to mitigate spread, but ISU researchers are looking for less expensive approaches. Jacek Koziel, professor of agricultural and biosystems engineering, has studied the benefits of using ultraviolet light, a spectrum of light with wavelengths that are too short for the human eye to detect, to eliminate dust and odor-causing particles associated with livestock production. Ultraviolet light has been shown to irradiate and scramble the RNA of some bacteria, and Koziel wondered if similar technology could address viral aerosols.

“Conventional UV is known to be bactericidal,” Koziel said. “UV has been used to kill bacteria in the food industry in many instances. The same mechanism is actually beneficial to kill the virus.”

Koziel is collaborating with Jeff Zimmerman, professor of veterinary diagnostic and production animal medicine, who has worked extensively with PRRS and other aerosolized viruses. The research team ran experiments in a Sukup Hall laboratory, exposing the virus to three kinds of ultraviolet light. The experiments involved aerosolizing samples of live viruses and then pumping the air through glass tubes that allow ultraviolet light to pass through. The researchers then measure how much virus survives exposure to the light.

Both the conventional and excimer UV light demonstrated an ability to inactivate the virus and show promise as potential avenues to fight PRRS. Exposure to ultraviolet light can pose a risk for people and pigs, but the excimer light involved in the study has been shown to be less harmful. The black light, which has been shown to be helpful in tamping down odor-causing gases, did not have a significant effect on the PRRS virus, according to the research.

Next Up: Testing on a Larger Scale

Zimmerman said ultraviolet light might offer pork producers and veterinarians a new tool for diease prevention or reduction. Some farmers install expansive ventilation systems in their barns to keep aerosolized viruses out of their operations, but those measures come with a hefty price tag, he said.

“It’s very costly to implement, and then there are ongoing maintenance concerns with making sure the buildings are airtight,” Zimmerman said. “The filters themselves are expensive and filter maintenance is not cheap. Ultraviolet fixtures could offer greater flexibility.”

The researchers hope to scale up their research to test the concepts under conditions that mimic a swine facility more closely. Koziel envisions a system where ultraviolet lamps are installed near ventilation intakes to make sure air that enters the area doesn’t carry aerosolized virus. Zimmerman said he expects interest to be high among pork producers if the team can demonstrate that the approach works as well in a barn as it does in a laboratory.

The research was funded by the National Pork Board.